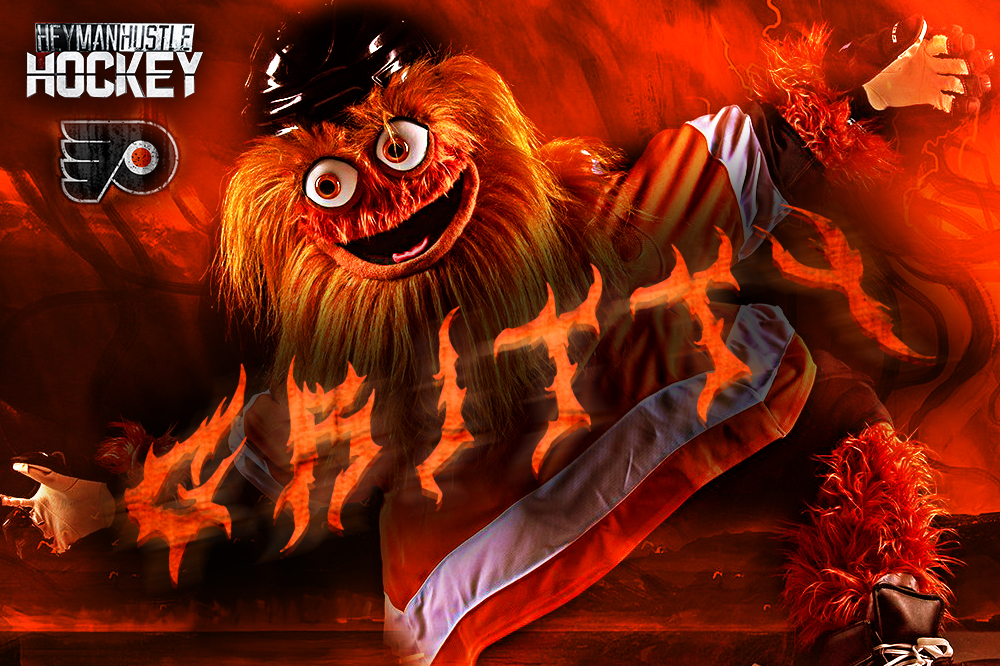 Philadelphia… home of the iconic Rocky Balboa statue, Geno’s and Pat’s, the Liberty Bell, the legendary ECW Arena, and now…

The newly-introduced, bulbous, bearded orange dream haunter that will serve as the Philadelphia Flyers‘ official mascot.

Join us in welcoming the newest member of the #Flyers Family, @GrittyNHL!!

Earlier today, Gritty was unearthed, unveiled, and unleashed on the world. But what is it, exactly? Well, aside from “utterly terrifying” and “certifiable nightmare fuel”, we’re not entirely sure…

As for “who is it?”, the Flyers have generously provided a bit of a backstory. Per NHL.com:

His father was a “bully,” so naturally he has some of those tendencies – talented but feisty, a fierce competitor, known for his agility given his size. He’s loyal but mischievous; the ultimate Flyers fan who loves the orange and black, but is unwelcoming to anyone who opposes his team. Legend has it he earned the name “Gritty” for possessing an attitude so similar to the team he follows.

He claims that he’s been around for a lot longer than we know it, and recent construction at the Wells Fargo Center disturbed his secret hideout forcing him to show his face publicly for the first time. He has some oddities that are both humorous and strange. A number of times he’s been caught eating snow straight from the Zamboni machine, and unbeknown to most, his love of hot dogs has been inflating the Flyers Dollar Dog Night consumption totals for years.

That being said, there’s no denying that he’s one of our own.

Will this ancient, Zamboni snow and dollar hot dog eating entity, now awoken from it’s underground death-like slumber, somehow lead the Flyers to their first Stanley Cup since 1975? Is Gritty actually a Lovecraftian, Cthulhuesque destroyer of worlds set to dominate and enslave all of humanity? Does covertly devouring mass quantities of hot dogs over the years, thus inflating consumption totals, constitute as fraud!?

We’re HustleTweeting about Gritty, and you’re more than welcome to join the conversation on the Hustle Twitter HERE and also on our hyper-interactive Facebook page HERE!