The Buffalo Bills vs The New York Jets Is ON For Monday ... In Detroit! 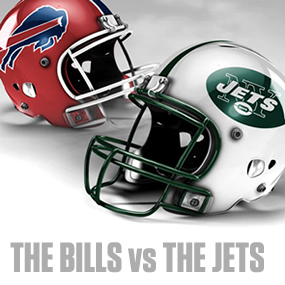 The Worst Snowstorm in Buffalo History (and think about what THAT means) Causes The NFL To Move The Game Into Lions Country!

The Buffalo Bills will play the New York Jets this coming Monday, but the record-breaking snowstorm that has crippled Upstate New York has taken its toll on the NFL Monday Night offering, as the game has been moved to Detroit!  With New York Governor Andrew Cuomo saying it would be “impractical” for the Bills to host the Jets as scheduled on Sunday, the NFL really had no choice but to move the game.

So the NFL announced on Thursday afternoon that the game would not take place in Buffalo due to the storm, but will kick off at 7 p.m. Eastern time on Monday …  in Detroit!  “All available public safety resources must be available for the community at this time,” Greg Aiello (spokesman for the NFL) said on Twitter.

The three sites that were in consideration wre Detroit, Washington D.C. and Pittsburgh, according to the New York Post.

The NFL has had a few games move to different days or sites, but it is rare. The Philadelphia Eagles played a 2010 home game against the Minnesota Vikings in Week 16 on a Tuesday night because of snow. Two weeks earlier, the Vikings played a “home” game against the New York Giants in Detroit after the Metrodome’s roof collapsed following a snow storm. The New Orleans Saints‘ home games in 2005 were moved from the Superdome after Hurricane Katrina damaged it. In 2003, the San Diego Chargers played a Monday night game at Arizona State University due to wildfires in San Diego. A 2008 game in Houston between the Ravens and Texans, slated for mid-September, was rescheduled for November 9th that year because of a hurricane.

Now that you know the history, why not join the conversation with us on Twitter? We’re Hustletweeting about Bills vs Jets in Detroit and you’re more than welcome to join the conversation by following us on twitter HERE or write to us directly at hustleoncrave@gmail.com Hey, have you checked out the Hustle’s Ultra High Quality You Tube Channel, with exclusive videos featuring OUR WORLD EXCLUSIVE WITH MIKE TYSON … BROCK LESNAR’S “HERE COMES THE PAIN” … ICE-T AND COCO’s SEX SECRETS … MMA BAD BOY NICK DIAZ … the list goes on and on, so if you’re not subscribing, you’re missing something … and by the ways cheapos, it’s FREE! Yes, absolutely 100 percent FREE! What are you waiting for? Check it out HERE!