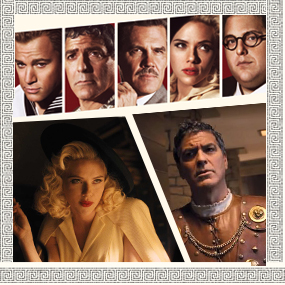 The Coen Bros. Do It Again!

The reviews are in, and everyone loves the Coen Bros. latest movie, Hail, Caesar! In a review posted by The New Yorker magazine, critic Richard Brody raves, “Hail, Caesar! is a comedy, and a scintillating, uproarious one, filled with fast and light touches of exquisite incongruity in scenes that have the expansiveness of relaxed precision, performed and timed with the spontaneous authority of jazz. Hollywood has been ripe for lampooning from the start, but, for all the movie’s incisive humor, the Coens don’t so much mock the movie colony as look on with an unusually benign astonishment at the contrast—only superficially a contradiction—between the absurd wonders of the movies that were made at the time and the even more absurd stories of their making.”

Kenneth Turan of The Los Angeles Times writes. ” … the Coens’ smart script is filled, especially in its names, with all manner of inside jokes and playful references to real people and places, including New Left philosopher Herbert Marcuse and the venerable Sunset Strip eatery Imperial Gardens. When an up-and-coming actress (Veronica Osorio), talks about dancing with fruit on her head, the reference is to Carmen Miranda but film buffs will know that the actress’ name, Carlotta Valdez, is at the heart of Alfred Hitchcock’s “Vertigo.” And so on. But the great thing about “Hail, Caesar!” is that it is fun whether you get all its references or not. Loving re-creations of classic Hollywood entertainments and lines like “Forgive me, father, I have sinned, I struck a movie star in anger” cannot fail to entertain, they really can’t.”

Michael Phillips of The Chicago Tribune wrote, “The film this one evokes within the Coens’ career, “Barton Fink,” was a much stranger and more idiosyncratic achievement, though in its Hollywood studio sequences, dominated by Michael Lerner and Tony Shalhoub, the pacing was breathless and priceless and really, really funny. “Hail, Caesar!” is more of a mild satiric stroll through familiar territory. In Mannix it’s possible to read a kind of idealized self-portrait of the Coens themselves, who are the ultimate Hollywood insider/outsiders, making big hits (“True Grit”) and wormy, crabby, more interesting work (“Inside Llewyn Davis”).”

So, what’s YOUR take on “Hail, Caesar!”? Please feel free to join the conversation by following the Hustle on Twitter HERE or write to us directly at hustleoncrave@gmail.com. Hey, have you checked out the Hustle’s Ultra High Quality YouTube Channel, with exclusive videos featuring Backstage with Brock Lesnar and Paul Heyman… The Footage “They” Never Wanted You To See … UFC Bad Boy Nick Diaz’s Wildest Video Ever … Behind The Scenes at WrestleMania … ICE-T and Coco’s Sex Secrets … the list goes on and on, so if you’re not subscribing, you’re missing something … and by the ways cheapos, it’s FREE! Yes, absolutely 100 percent FREE! What are you waiting for? Check it out HERE!