The Donald of Douchebaggery 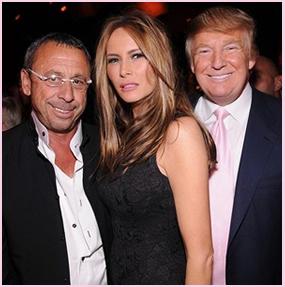 We here at THE HEYMAN HUSTLE have been most amused by the king of gonzo celebrity websites, Uncle Scoopy, and his DOUCHEBAG OF THE MILLENNIUM AWARDS. The concept is just so simple, and yet at the same time, so damned brilliant. Then this morning, when we were going through our mail at hustleoncrave@gmail.com, we got a press photo of The Donald along with MILF Mrs. Trump and Victor Drai at XS Nightclub at Encore. Drai is a big shot in Vegas, as he is co-owner of,Tryst nightclub inside Wynn Las Vegas and Botero restaurant inside Encore Las Vegas. He’s been dubbled the “father of the Las Vegas after-hours scene” by Las Vegas Review-Journal celebrity columnist Norm Clarke. In other words, he has no problem getting laid.

Speaking of which, we have two questions regarding Mr and Mrs Trump.

1 – Why does it still look like The Donald always has to go to the bathroom? Even when he smiles, that look on his face is as bad as his F’N hairdo.

2 – What’s that look on his wife Melania’s face? WTF? She’s hot as balls; has her hooks into millions and millions and millions and millions of dollars; gave birth to another Trump heir, so she has someone that’ll always take care of her when Donald grows tired of her and trades her in for a newer younger bang-toy. Smile, honey. Come on, you’re good looking and filthy rich. Crack a smirk. Anything but that frown that looks like Donald just passed gas.

CLICK HERE TO SEE THE DONALD’S CAMEO ON THE FIRST SEASON OF THE HEYMAN HUSTLE!

IN TODAY’S "INSTANT INFORMATION" AGE, THERE IS NO TIME TO
SPEND YOUR ENTIRE DAY SURFING THE NET, LOOKING FOR THE
PERFECT STORY TO SWEEP YOU AWAY FROM THE INSANITY THAT
SEEMS TO RULE THE GLOBE. NO PROBLEM. OUR TRAINED MONKEYS
HAVE HANDLED THE SEARCH FOR YOU. JUST PICK A PIC … AND CLICK!