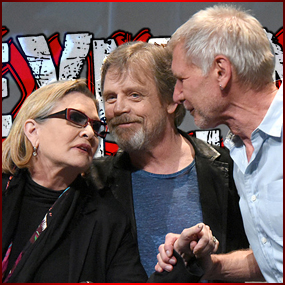 JJ Abrams, Kathleen Kennedy, LucasFilm and Disney let the force of the upcoming Star Wars reboot flow at San Diego Comic-Con with the most heavily-anticipated panel of the year, which took in Hall H.
While a new trailer was not released, a behind the scenes video was shown to the crowd, and it was probably a bigger crowd pleaser than if more footage from the film was revealed in a new trailer. But nothing compared to the moment when Harrison Ford surprised the audience and took the stage. This entire panel was truly epic and only served to further the remarkable hype surrounding Star Wars: The Force Awakens.

Of course, we’re HustleTweeting about Star Wars: The Force Awakens, and you’re more than welcome to join the conversation by following the Hustle on Twitter HERE or write to us directly at hustleoncrave@gmail.com Hey, have you checked out the Hustle’s Ultra High Quality You Tube Channel, with exclusive videos featuring the #HUSTLEBOOTYTEMPTATS SUPERMODEL OF THE YEAR … OUR WORLD EXCLUSIVE WITH MIKE TYSON … BROCK LESNAR’S “HERE COMES THE PAIN” … ICE-T AND COCO’s SEX SECRETS … MMA BAD BOY NICK DIAZ … the list goes on and on, so if you’re not subscribing, you’re missing something … and by the ways cheapos, it’s FREE! Yes, absolutely 100 percent FREE! What are you waiting for? Check it out HERE 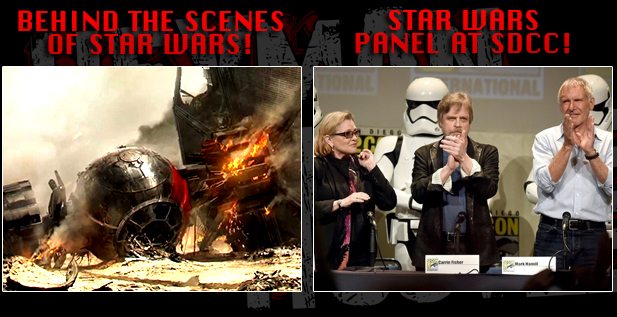