The Force May Be with IMAX 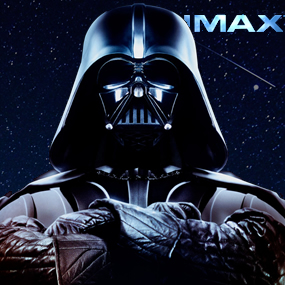 The new “Star Wars” film just may be filmed in IMAX!

IMAX C.E.O. Richard Gelfond dropped a bombshell at the Goldman Sachs’ Annual Communacopia Conference, revealing that the next Star Wars movie may be filmed, in part, in IMAX format. Speaking about the increase in films being shot in IMAX format and screen ratio, Gelfond stated, “We are talking to J.J. Abrams (about the next) Star Wars being used with partly IMAX cameras.” The high-powered exec noted that Christopher Nolan’s Interstellar and Michael Bay’s Transformers: Age of Extinction are being shot specifically for IMAX. Abrams himself is no stranger to shooting in IMAX, as parts of Star Trek Into Darkness were shot in that format. Star Wars movies have always been shot in CinemaScope. Perhaps until now.

Of course, we’re HustleTweeting about “Star Wars” and IMAX, and you’re more than welcome to join the conversation by following THE HEYMAN HUSTLE and telling us what YOU think RIGHT F’N HERE! We got the whole social media thing covered, so check out the Hustle’s Ultra High Quality You Tube Channel, with exclusive videos featuring OUR WORLD EXCLUSIVE WITH MIKE TYSON … BROCK LESNAR’S “HERE COMES THE PAIN” … ICE-T AND COCO’s SEX SECRETS … TEEN SENSATION TAYLOR MOMSEN … UFC BAD BOY NICK DIAZ … THE WALKING RIOT MISSY HYATT if you’re not subscribing, you’re missing something … and by the ways cheapos, it’s FREE! Yes, absolutely 100 percent FREE! What are you waiting for? Check it out HERE!