The Heyman Hustle Comes to CraveOnline! 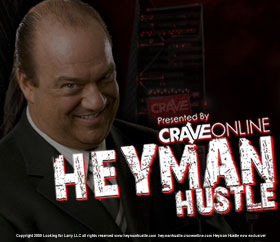 (New York, New York) — He was known as “The Mad Scientist,” based on his ability to build unique and identifiable characters in professional wrestling, but since his departure from World Wrestling Entertainment, Paul Heyman has been Hustlin’!

Heyman, who was named one of the world’s top 100 marketers by Advertising Age magazine for his expansion and absurdly-high Q-rating achieved for his Extreme “ECW” promotion, launched “The Heyman Hustle” digital program in the UK last year, and the program shot through the roof. For Larry Productions, Heyman took to the streets of NYC and interviewed everyone from James Lipton to Jesse Ventura, from Ice-T and Coco to Aubrey O’Day, from The Naked Cowboy to Playboy’s Holly Madison.

Partnering with Hi-def impresario Mitchell K. Stuart of the Park Avenue firm HQ / Looking For Larry Productions, Heyman took to the streets of NYC and interviewed everyone from James Lipton to Jesse Ventura, from Ice-T and Coco to Aubrey O’Day, from The Naked Cowboy to Playboy’s Holly Madison.

Now, The Heyman Hustle comes to CraveOnline, and the opportunities are endless!

“I always hate press releases where everyone talks about how they look forward to the synergy between the two brands, how we’re a perfect fit, why this business marriage is taking place,” Heyman stated, “CraveOnline is an enormous platform, and their ad sales staff is outrageously successful. The rest of the hype will be have to be in the presentation of the product we deliver to our audience.”

To kick things off, the top 5 episodes from season one of the Hustle will be posted on Crave. The controversial episode with former Danity  Kane lead singer Aubrey O’Day will kick things off, with brand new exclusive content of Aubrey in Las Vegas.

“We’re not looking to reinvent the wheel,” stated Stuart, who is the co-creator of the Hustle, “just redefine the digital medium. Why set your goals anywhere but sky high?!?” 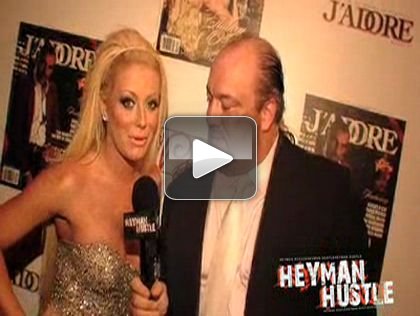