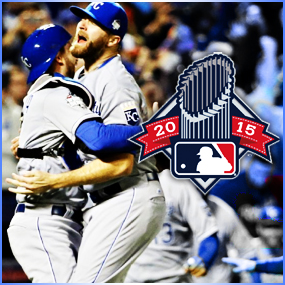 Yet another come-from-behind victory for KC delivers the championship to the Royals!

At 12:34 local time in New York, the Mets season came to an end, and the Kansas City Royals captured the World Series with a 7-2 victory in 12 innings. The 111th World Series was captured by KC in 5 games, as the team collected  their first title since 1985 and provided a lifetime of memories for the fans who stuck with this franchise through 29 years without a playoff appearance.

This group, assembled by general manager Dayton Moore, shepherded through the season by manager Ned Yost, stands alone atop Major league Baseball. When Moore took over the baseball operations of this franchise, the team resided in baseball’s basement, a running joke among their peers. Now they stood alone. So when the final 95-mph fastball of Wade Davis reached the glove of catcher Drew Butera, the rest of team bounded over the dugout steps to celebrate their accomplishment.

Charging in from the dugout were Christian Colon, the man who drove in the winning run, and Jarrod Dyson, the man who scored it. Both were mothballed on the Kansas City bench for the duration of these playoffs. Both emerged in the 12th inning to complete the run of a lifetime.

Dyson hopped out of the dugout to replace Salvador Perez at first base after Perez led off with a single off Mets reliever Addison. Dyson proceeded to utilize his finest skill, the speed that convinced the Royals to stick with him as a 50th round draft pick in 2006. So he stole second base.

Two batters later, Colon picked up a bat for the first time this postseason. Reed refused to throw him a fastball. Colon waited until a fifth slider crossed the plate. Then he punched the go-ahead single into left field and thumped his chest at first. In the aftermath, the Mets bullpen imploded. The Royals notched four more runs, the last three on a bases-clearing double by Cain.

But linger, for a moment, on Colon at first base. His teammates clambered over their dugout to salute him. He now had a career highlight to pair with his game-tying infield single from the American League Wild Card game in 2014.

That night, so many months ago, solidified the ethos of this team. Pushed to the brink, the Royals do not break. Instead, it is their opponents who buckle. On Sunday, in the final flourish of the season, the team followed their formula. They strung together a ninth-inning comeback with timely hitting and daring displays on the bases. I

As the bottom of the eighth inning wound down, the fans at Citi Field shouted for another inning from Matt Harvey. He had blanked the Royals for the duration of the evening. He had struck out nine. Inside his own dugout, he argued with manager Terry Collins, insisting on staying in the game.

Harvey wanted the ninth. He wanted the Royals. Perhaps history will forgive him for his impudence. Because the Royals did not.

The rally started in the most unlikely of ways for Kansas City. Down two strikes, Lorenzo Cain battled his way back for a walk. The crowd stirred. Harvey tried to drive a 94-mph fastball past Eric Hosmer’s knees. Hosmer did not let the baseball pass, thumping an opposite-field, RBI double.

The hit halved the score and petrified the park. Collins fetched Harvey and handed the baseball over to Familia. Before this series, the presence of Familia almost guaranteed a Mets victory. Yet in the first four games here, he had already blown two saves. A third would soon follow.

Guile ruled the day. After Moustakas advanced Hosmer to third base, Salvador Perez stepped to the plate. He tapped a grounder toward third baseman David Wright. As Wright whirled to throw to first, Hosmer broke for the plate. A precise throw from Lucas Duda would have ended the game.

Duda did not make a precise throw. His volley home sprayed wide. Hosmer slide head-first across the plate to tie the game. The Royals dugout jumped with joy.

During the regular season, the Royals resembled a freight train, barreling past their foes. In the playoffs, they transformed into Ali in Zaire, luring opponents into a false sense of comfort, only to strike in the highest-leverage spots. The Royals possessed the chin of a champion. After the way the 2014 season finished, no singular shot could shake them.

When their season ended last October, with the tying run stranded at third base in Game 7 of the World Series, the Royals felt the sort of heartbreak that lingers through the winter. The players mourned the loss and sought to convert the pain into fuel for 2015.

Kansas City became the best team in the American League. They won their first division title in 30 years. Their players shined at the All-Star Game. Their coffers filled with a franchise-record for attendance at Kauffman Stadium. The renaissance emerged in full bloom.

Except all of this would have been coated with bile, rendered meaningless, if the Royals had been unable to defy incredible odds in the first round. The journey from the brink of the abyss to postseason bliss lasted 21 days. It may be difficult to recall now, in the wake of popped bottles and kept promises, but the Royals looked on the verge of a collapse in Houston.

Across 162 games during the season, the Royals played like the best team in the American League. During the first 34 innings of the American League Division Series with the Astros, the Royals played like the second best team on the field. October allows scant time for second chances, for extended slumps, for platitudes like “We’ll get them tomorrow.” Tomorrows do exist in the postseason, but they disappear with expediency when you lose.

At 3 p.m. on October 12, Kansas City trailed Houston by four runs. Six outs remained in their season. Then Alex Rios hit the first pitch he saw from reliever Will Harris into left field. Escobar fished for a curveball and found a hit. Ben Zobrist cracked a line drive into center field, where outfielder Carlos Gomez declined to dive.

By know, of course, the rest of the story has been written into Royals legend, standing alongside the 2014 American League Wild Card Game as the exemplars of this club’s fortitude. The club earned a chance to rewrite the chapter they could not get right in last year’s World Series against San Francisco.

The seventh comeback of the postseason occurred on Saturday night. The victory allowed the Royals to hit their pillows dreaming of a title.

The players tried to treat this like any other ordinary day. Hosmer suffered through a defeat by his New York Giants. Perez caught Cain gazing at fantasy football stats and filmed him with his iPhone. As Cain stared into the camera, in a video bound for Instagram, Perez planted a kiss across his temple. He escaped before Cain could backhand him.

A couple dozen Royals fans ringed the dugout as the team took batting practice. They showered Moore and Yost with applause. They serenaded Paulo Orlando to celebrate his 30th birthday. Each Royal received an ovation.

As the players warmed up, Volquez prepared inside his clubhouse. He had only rejoined the team night before. He learned minutes after leaving the mound in Game 1 about the death of his father. Volquez retreated to the Dominican Republic for the memorial service.

While Volquez was away, the team maintained minimal contact with him. Pitching coach Dave Eiland felt uncomfortable asking Volquez about baseball when his loss was so fresh. Volquez assured Eiland he could pitch. He told his close friend, Johnny Cueto, the same as they watched their teammates author another stirring comeback in Game 4.

On the third pitch of the game, Volquez allowed a changeup to flatten across the heart of the plate. Curtis Granderson boomed a solo shot over the center-field fence. Volquez recovered to avoid further damage in the inning, but a one-run lead against Harvey looked daunting.

A two-run lead looked even worse. Volquez yielded his second run in the sixth inning when Duda lofted a sacrifice fly. It would be up to the lienup to conquer Harvey.

During Game 1, Harvey generated only two strikeouts. He matched that number in Sunday’s first inning.

Harvey does not deal in deception. He piles power upon power. His fastball approaches triple digits. His slider clocks at 90 mph. His changeup resides only a few ticks lower.

In the fourth, Harvey displayed the depth and breadth of his arsenal. With the count at 3-1, Cain chased a high fastball. Harvey finished him off with a changeup, down and in. Hosmer flailed at a curveball for a second strikeout.

The last victim was Moustakas. Harvey flipped a pair of curveballs for strikes. Then he blazed a 98-mph fastball past Moustakas to strike out the side. Harvey pumped his fist as he headed for his dugout.

The celebration looked premature. The Royals, after all, do their most devastating damage in the later innings. Harvey would receive a reminder in the ninth.

Harvey refused to bend. When Alex Gordon walked in the fifth, Harvey struck out the next two batters. When Zobrist rifled a single in the sixth, Harvey fanned Cain and induced a groundball out from Hosmer. When Moustakas led off the seventh with a hit, Harvey stranded him at first.

As Harvey toiled in the eighth, Familia warmed up in the bullpen. But inserting him into the game looked dicey. The night would belong to Harvey.

So he headed back out for the ninth shouldering the responsibility. After Hosmer’s hit, he handed the baseball to his manager and watched his closer stumble for the third time in five games.

The ending would not come until three innings later. But Citi Field loomed as the last mountain for the Royals to climb. As the ballpark emptied, the Kansas City Royals stood alone.

Of course, we’re HustleTweeting about The Kansas City Royals, and you’re more than welcome to join by following the Hustle on Twitter HERE or write to us directly at hustleoncrave@gmail.com Hey, have you checked out the Hustle’s Ultra High Quality You Tube Channel, with exclusive videos featuring the #HUSTLEBOOTYTEMPTATS SUPERMODEL OF THE YEAR … OUR WORLD EXCLUSIVE WITH MIKE TYSON … BROCK LESNAR’S “HERE COMES THE PAIN” … ICE-T AND COCO’s SEX SECRETS … MMA BAD BOY NICK DIAZ … the list goes on and on, so if you’re not subscribing, you’re missing something … and by the ways cheapos, it’s FREE! Yes, absolutely 100 percent FREE! What are you waiting for? Check it out HERE!