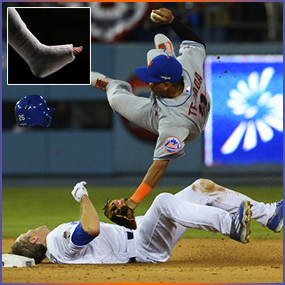 New Yorkers are far from squeamish, even when it comes to rugged baseball plays. When Pete Rose infamously roughed up Bud Harrelson, NYers took a callous view because their shortstop lost the fight to Charley Hustle. While a NY sports team has never gone as far as The Broad Street Bullies in Philadelphia, the New York sports fan doesn’t dole out sympathy too often. Not when Lawrence Taylor snapped Joe Theisman‘s leg in half, not when Mike Tyson would go on his insane rants and tirades or just start biting any ear that was in front of him.

Chase Utley didn’t slide into second base. He performed a rolling tackle and broke the right leg of Ruben Tejada, and New Yorkers are rightfully pissed off about it. So is Major League Baseball’s Chief Operations Officer Joe Torre, who officially suspended the thirty six year old Utley for Games 3 and 4 of the Mets-Dodgers series, stating that Utley was guilty of an illegal slide into Tejada that warranted discipline.

“While I sincerely believe that Mr. Utley had no intention of injuring Ruben Tejada and was attempting to help his club in a critical situation, I believe his slide was in violation of Official Baseball Rule 5.09 (a) (13), which is designed to protect fielders from precisely this type of rolling block that occurs away from the base,” Torre said.

Utley’s agent, Joel Wolfe, said Sunday night that Utley intended to appeal the suspension, terming it “outrageous and completely unwarranted.” The appeal gives Utley the right to keep playing until it is resolved, but it is possible Major League Baseball will move to have the appeal heard on Monday before Game 3 is played at night. The appeal will be heard by John McHale Jr., baseball’s executive vice president for administration and a colleague of Torre’s.

On the play in question, which occurred in the bottom of the seventh inning with the Mets leading by 2-1, Utley did not slide until he was almost on top of the second-base bag, and he actually struck Tejada from behind as the shortstop was trying to turn his body and throw to first base.
If the suspension is quickly upheld by McHale, Utley, a longtime Philadelphia Phillies star who joined the Dodgers earlier this season, will not appear on the field in New York during the current series between the two teams. If the series extends to a fifth, and final, game in Los Angeles, Utley would be allowed back in uniform.

Torre’s conclusion that Utley’s slide was out of bounds also had the effect of calling the result of Game 2 into question, although the final score (Dodgers 5, Mets 2) will remain intact.

Utley was on first, and another Dodgers runner, Enrique Hernandez, was on third when, with one out, Howie Kendrick hit a ground ball up the middle. Mets second baseman Daniel Murphy fielded the ball and flipped it to Tejada just as Utley was hurtling toward him.

As Tejada was toppled, Hernandez scored to tie the game at 2-2. Utley was called out at second, but when the Dodgers asked for a video review, the umpires concluded that Tejada’s toe had never touched second for the force play. Utley was thus safe and returned to second base even as Tejada was being taken off the field in a cart. Kendrick, meanwhile, was on first, and instead of two outs in the inning, there was still only one.

And by the time the bottom of the seventh ended, the Dodgers had scored three more times to put the game away.

But had the umpires viewed the play the same way Torre now does, they would have called Utley out for interference and ruled that the batter was out as well. The Mets would have ended up with a double play that would have concluded the seventh with the score still 2-1 in their favor. Torre addressed that issue Sunday night, noting that interference could be called only on the field and could not be invoked after video review. In other words, when the umpires reviewed the play and judged that Tejada had not touched second base, they did not also have the option to retroactively decide that Utley was guilty of something illegal.

“Determining where to draw the line between an illegal slide and legitimate hard play is an extremely difficult call for our umpires,” Torre said.

The tension between the two teams, now at an all time high, will be the story that unfolds in front of our very eyes as the series continues Monday night in Queens.

Of course, we’re HustleTweeting about the entire controversy, and you’re more than welcome to join the conversation by following the Hustle on Twitter HERE or write to us directly at hustleoncrave@gmail.com Hey, have you checked out the Hustle’s Ultra High Quality You Tube Channel, with exclusive videos featuring the #HUSTLEBOOTYTEMPTATS SUPERMODEL OF THE YEAR … OUR WORLD EXCLUSIVE WITH MIKE TYSON … BROCK LESNAR’S “HERE COMES THE PAIN” … ICE-T AND COCO’s SEX SECRETS … MMA BAD BOY NICK DIAZ … the list goes on and on, so if you’re not subscribing, you’re missing something … and by the ways cheapos, it’s FREE! Yes, absolutely 100 percent FREE! What are you waiting for? Check it out HERE