The New York Mets Advance To The World Series 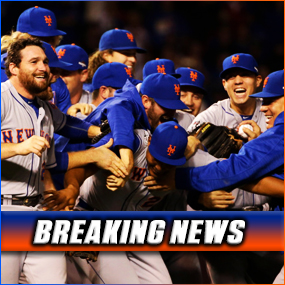 The New York Mets Sweep The Chicago Cubs For The 5th NL Pennant before 42,227 at Wrigley Field!

The New York Mets are headed to the World Series, following a four-game sweep of the Chicago Cubs with a 8-3 victory in Game 4 of the NLCS. Most would credit the final victory needed to advance to the World Series to Lucas Duda. Duda was the hero with a five-RBI performance that allowed rookie Steven Matz and the bullpen to coast in the most lopsided game of the series. Daniel Murphy established an all-time postseason record by hitting a home run in a sixth consecutive game, breaking a record he shared with Carlos Beltran. The Mets will play Game 1 of the World Series on Tuesday in Kansas City or Toronto, depending the outcome of the ALCS. Tuesday will mark the Mets’ first World Series appearance since 2000, when they lost to the Yankees in five games. If the Mets win the World Series, it will be their first World Series championship since 1986.

Of course, we’re HustleTweeting about the New York Mets, and you’re more than welcome to join the conversation by following the Hustle on Twitter HERE or write to us directly at hustleoncrave@gmail.com Hey, have you checked out the Hustle’s Ultra High Quality You Tube Channel, with exclusive videos featuring the #HUSTLEBOOTYTEMPTATS SUPERMODEL OF THE YEAR … OUR WORLD EXCLUSIVE WITH MIKE TYSON … BROCK LESNAR’S “HERE COMES THE PAIN” … ICE-T AND COCO’s SEX SECRETS … MMA BAD BOY NICK DIAZ … the list goes on and on, so if you’re not subscribing, you’re missing something … and by the ways cheapos, it’s FREE! Yes, absolutely 100 percent FREE! What are you waiting for? Check it out HERE

THE METS ADVANCE TO THE WORLD SERIES!