The New York Mets Continue Their Spending Spree, Pick Up Pitcher Bartolo Colon For Two Years in a Surprise 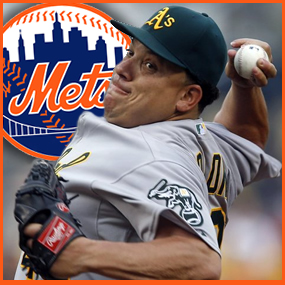 Coming on the heels of THE NEW YORK METS SIGNING OUTFIELDER CURTIS GRANDERSON, the ball club has signed pitcher Bartolo Colon to a two-year, $20 million dollar deal, pending a physical. The prevailing opinion by those close to the team is that the acquisition comes as a surprise, since Mets GM Sandy Alderson expressed to the media that he was hesitstant about giving a multi-year contract to a starting pitcher. But in the pursuit of the 40-year-old Colon, the Mets knew they were bringing magic to the roster, since Colon went 18-6 with a 2.65 ERA last season for Oakland and will give the Mets a potential ace for a rotation that also will include Zack Wheeler, Jon Niese and Dillon Gee, with Jenrry Mejia a strong candidate for the fifth spot.

Bartolo Colon pitched for the New York Yankees in 2011, going 8-10 with a 4.00 ERA. He signed with Oakland after the season and last year finished sixth in the American League Cy Young award voting. Colon joins Granderson and Chris Young as pickups for the Mets in this off-season, and the team may not be done. They are apparently still looking for a shortstop and bullpen help, and has discussed trades of Ike Davis and Daniel Murphy that would potentially make another $9 million available toward next season.

Bartolo Colon is 189-128 with a 3.94 ERA during a major league career that began with the Indians in 1997. He won the AL Cy Young award with the Angels in 2005, when he 21-8 with a 3.48 ERA. Of course, we’re HustleTweeting about the Mets and their brand new pitcher, and we’d love for you to join the conversation by following THE HEYMAN HUSTLE and telling us what YOU think RIGHT F’N HERE! We got the whole social media thing covered, so check out the Hustle’s Ultra High Quality You Tube Channel, with exclusive videos featuring OUR WORLD EXCLUSIVE WITH MIKE TYSON … BROCK LESNAR’S “HERE COMES THE PAIN” … ICE-T AND COCO’s SEX SECRETS … TEEN SENSATION TAYLOR MOMSEN … UFC BAD BOY NICK DIAZ … THE WALKING RIOT MISSY HYATT if you’re not subscribing, you’re missing something … and by the ways cheapos, it’s FREE! Yes, absolutely 100 percent FREE! What are you waiting for? Check it out HERE!