The New York Mets Have Now Won Ten In a Row 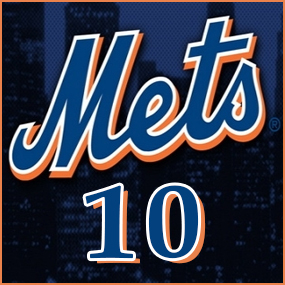 The New York Mets are the hottest team in Major League Baseball. How the hell did this happen? In what is the longest winning steak for New York’s “other baseball team” since they won ten in a row July 5th through the 17th, 2008, The New York Mets have now won ten games in a row. It is only the ninth time in the team’s history, which started in 1962, the Mets have won at least ten straight game. With New York looking for a new hero since DEREK JETER RETIRED (and still so public resentment against ALEX RODRIGUEZ), the Mets’ Lucas Duda has become the most celebrated ball player in the Big Apple. It was Duda who hit a go-ahead single in the eighth inning that sent the Mets to their 10th consecutive victory Wednesday night, 3-2 over the Atlanta Braves.

“It’s unbelievable,” Duda commented. “Coming to the ballpark every day. Just a great feeling when you in the doors. It’s just fun. There’s no other word to describe it. It’s pretty special. It’s hard to do.”

“These guys have just taken off,” manager Terry Collins boasted. “I salute every single one of them.” Of course, we’re HustleTweeting (as you can see below) about The New York Mets, and you are more than welcome to join the conversation by following The Heyman Hustle on Twitter HERE! You can also post your thoughts on our Facebook page HERE!  If you feel compelled to write us, please do so at HustleOnCrave (at) Gmail.com

The NY @Yankees are celebrating “A VICTORY” .. The @Mets have racked up TEN IN A ROW!!! Dvon, GET THE TABLES!!! pic.twitter.com/IbefrfHNME