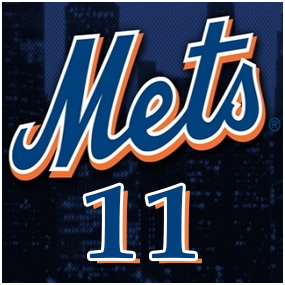 The Hottest Team in Baseball Has Everyone Watching!

Heading into a Subway Series against The New York Yankees, baseball’s unlikely heroes The New York Mets equaled a team record with its 11th straight victory, as Daniel Murphy drove in four runs to lead the team to its win. “I think it’s so rewarding here in this clubhouse to kind of see the fruits of the labor over the last couple years, to see guys grow,” Murphy said. “And I think it’s such a reward for the fans who have been coming out.”

How’s this fact? The New York Mets, with the top record in the majors despite injuries to captain David Wright and several other important players, are 10-0 at Citi Field.

Here’s another. It is the fifth time the Mets have won 11 games in a row, and the first since 1990. “It’s a huge accomplishment,” manager Terry Collins said. “I’m very proud of the guys. But it’s over. We’re going to enjoy it tonight, but we’ve got to get ready. We’ve got a tough road trip ahead of us starting on the other side of town.”

Full coverage of The Subway Series: Mets vs Yankees at Yankee Stadium here on THE HEYMAN HUSTLE this weekend, and we’re HustleTweeting about it … so please feel free to join the conversation by following The Heyman Hustle on Twitter HERE! You can also post your thoughts on our Facebook page HERE!  If you feel compelled to write us, please do so at HustleOnCrave (at) Gmail.com