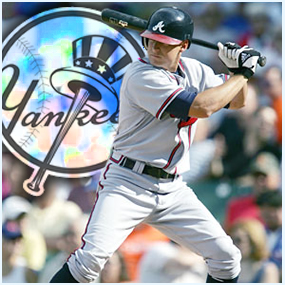 … and this one could affect what happens with A-Rod!

Just one day after THE NEW YORK YANKEES SCOOPED A MAJOR NAME AWAY FROM THE BOSTON RED SOX the world’s most famous baseball has signed another star. According to CBSSports.com the Bronx Bombers have signed infielder/outfielder Kelly Johnson to a one-year deal in the $3 million range, pending a physical.

But it gets even more interesting from there.

What will happen if A-Rod opens the season suspended, and Cano signs with another team? Johnson, who is 31 years old, hit .235/.305/.410 with 12 doubles, 16 homers and 52 RBI in 407 plate appearances in a utility role last season for the Rays. He saw time at second base, third base, first base and left field. He’s a second baseman by trade, having played 809 of his career 960 games there.

It’s getting very interesting in the Bronx, isn’t it? Of course, we’re HustleTweeting about The New York Yankees, and you’re more than welcome to join us by following THE HEYMAN HUSTLE and telling us what YOU think RIGHT F’N HERE! We got the whole social media thing covered, so check out the Hustle’s Ultra High Quality You Tube Channel, with exclusive videos featuring OUR WORLD EXCLUSIVE WITH MIKE TYSON … BROCK LESNAR’S “HERE COMES THE PAIN” … ICE-T AND COCO’s SEX SECRETS … TEEN SENSATION TAYLOR MOMSEN … UFC BAD BOY NICK DIAZ … THE WALKING RIOT MISSY HYATT if you’re not subscribing, you’re missing something … and by the ways cheapos, it’s FREE! Yes, absolutely 100 percent FREE! What are you waiting for? Check it out HERE!