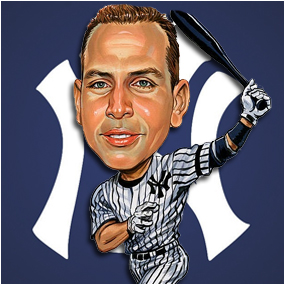 … and now all eyes turn to A-Rod’s pursuit of Willie Mays’ place on the home run list!

Alex “A-ROD” Rodriguez hit a solo homer and drove in two runs as the New York Yankees beat the Mets 6-4 to win two out of the three games in this year’s Subway Series.  Gregorio Petit, Brett Gardner and Chris Young had one RBI apiece for the Yankees, who improved to 11-8 on the young season. Nathan Eovaldi allowed four runs on seven hits while striking out six over 4 1/3 innings. Chasen Shreve got the final two outs in the fifth.

Former Yankee Curtis Granderson hit a solo homer for the Mets, who entered this weekend series on an 11-game winning streak. Daniel Murphy went 2-for-3 with two RBI. Jon Niese gave up six runs (four earned) on eight hits over five innings for the Mets, who committed four errors on Sunday. It was the sloppiest game for the normally-tight team this season.

But now all eyes are on Rodriguez. He is one shy of Willie Mays’ fourth place on the all time home run list. When A-ROD smacks the next two home runs, he’s due a huge bonus. The Yankees, however, have indicated they don’t want to pay Rodriguez the bonus.

Get ready for a knockdown drag-out fight in the media over this one. Of course, we’re HustleTweeting about The Subway Series and about A-ROD, and you’re more than welcome to join the conversation by following The Heyman Hustle on Twitter HERE! You can also post your thoughts on our Facebook page HERE!  If you feel compelled to write us, please do so at HustleOnCrave (at) Gmail.com

@Mets Yankees. We are the YANKEES.

@Yankees thanks for the update. We like to be associated with the great city of New York but if you don’t like to that’s cool.