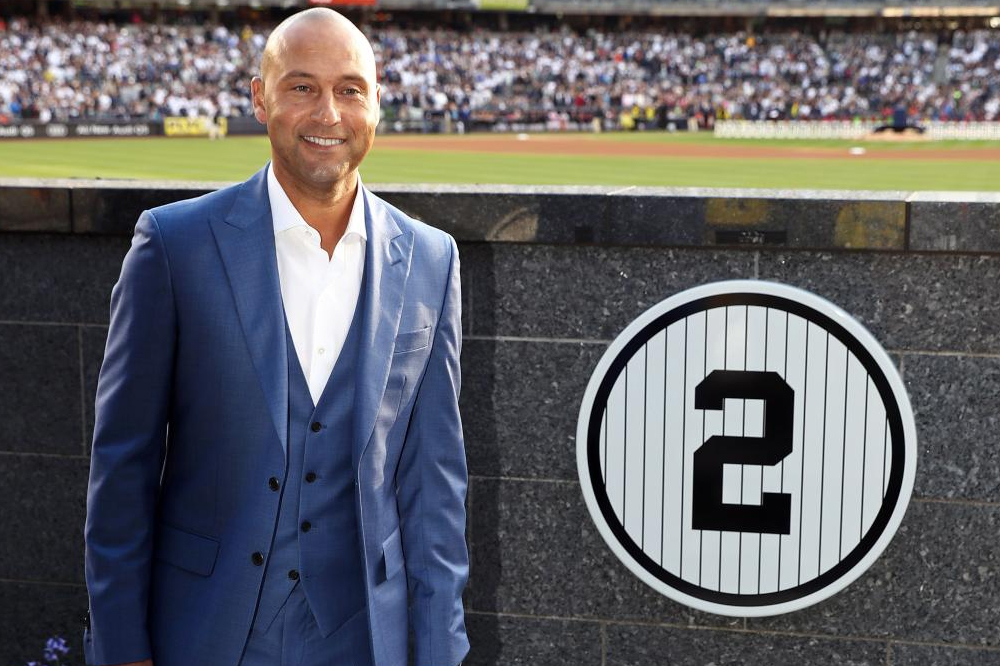 The New York Yankees retired Derek Jeter‘s number “2” jersey today. The “Captain” entered to Frank Sinatra’s “My Way” and exited to Tina Turner’s “Simply The Best” as the stadium in the Bronx reverberated with chants of “Der-ek Je-ter!” serenading the legendary Yankee player as he was honored by the team.

Jeter’s is the 22nd number in franchise history to be retired. His number “2” was the last single-digit uniform available to Yankees. He was given a plaque listing his many accomplishments, like his franchise-high 3,465 hits, his 2,747 games played, his 11,195 at-bats, 544 doubles, 358 stolen bases, 14 All-Star Games and five World Series rings.

Three of George Steinbrenner’s children, Jessica, Hal and Jennifer, gave him plaques and rings, and former teammate Carlos Beltran gave him a Monument Park blazer, given only to Yankees with their number retired. He was joined by many of his teammates, like other Core Four members Jorge Posada, Mariano Rivera and Andy Pettitte, former manager Joe Torre, and bench coach Don Zimmer’s widow, Soot. Florida Marlins manager Don Mattingly, the captain before Jeter, congratulated him with a video message.

“You know, you play here in New York for 20 years,” Jeter said. “I learned that time flies, memories fade, but family is forever and I’ll be eternally grateful to be a part of the Yankees family, so I can’t thank you guys enough.”

We’re HustleTweeting about Derek Jeter, and you’re more than welcome to join the conversation on the Hustle Twitter HERE and also on our hyper-interactive Facebook page HERE!