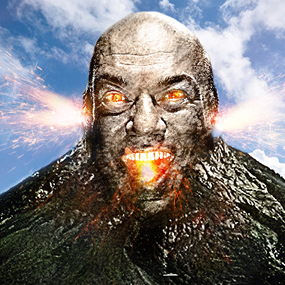 See the video … and a full transcript of our very own Hustler De Tuti Hustlers’ epic promo leading into this Sunday’s Hell in a Cell pay per view versus CM Punk!

We don’t even know where to begin. Our boss Paul Heyman delivered one of the memorable interviews of his entire career on WWE Monday Night RAW, and we think WWE.com can provide coverage from here:

CM Punk’s dropped his fair share of pipe bombs over the years, but not even “The Best in the World” has rained down fire on unsuspecting villagers and destroyed their houses. In a manic tirade sparked by a backstage interview with Renee Young, Paul Heyman took his hatred for Punk to a new extreme, likening himself to an uncontrollable volcanic force of nature as he prepares to team with Ryback against Punk in a Handicap Hell in a Cell Match this Sunday.

We can’t help but applaud Renee for not only maintaining a straight face amidst the chaos, but for resisting the urge to vacate the area as an incensed Heyman blew his top.

WWE.com editors still can’t get enough of the ECW mastermind’s explosive rant, which inspired this nightmare-inducing image of a Punk-melting “Paulcano.” Gaze at its baffling magnificence, then relive Heyman’s entire fiery tirade below.

Sunday, Sunday, Sunday! It’s an execution live on WWE pay-per-view, as “The Best in the World” CM Punk straps me into the electric chair, puts the poison into my veins, lines me up in front of the firing squad and pulls the trigger himself! For the first time ever — and for the first time ever again — it will never, ever happen … as a non-participant gets locked inside of a cell with a man who doesn’t spend his night fantasizing about the Diiiiivas. CM Punk spends his night fantasizing and obsessing about the massacre he wants to inflict upon Paul Heyman. CM Punk wants to take me down, take me out, DRIVE ME AWAY from WWE forever.

But just like when a volcano is trapped inside of a dormant mountain. When that volcano finally erupts and the lava — the molten lava — drips down the side of the mountain … I’m just like that lava! I’m red-hot! I’m out of control! And all of the villagers, with the lava pouring down into their houses, destroying their cars, suffocating and melting their flesh, and the villagers are going “run for your lives, run for your lives, run for your lives!” They’re the ones that love and worship CM Punk! And I’m the one … that has a different strategy.

Because I’m not all filled with emotion like CM Punk, Renee. I’m cold-hearted. And I’m calculated. And I’m in control … the same way I’ve controlled CM Punk all of these years.  The same way I control my monster, Ryback. And CM Punk cannot get past my monster, Ryback, which means CM Punk can’t get his hands on me. Which is why Sunday, Sunday, Sunday, I’m not locked in a cell with CM Punk, CM Punk is locked in a cell with me.

Of course, we’re HustleTweeting about The Paulcano, and you’re more than welcome to join the conversation by following THE HEYMAN HUSTLE and telling us what YOU think RIGHT F’N HERE! We got the whole social media thing covered, so check out the Hustle’s Ultra High Quality You Tube Channel, with exclusive videos featuring OUR WORLD EXCLUSIVE WITH MIKE TYSON … BROCK LESNAR’S “HERE COMES THE PAIN” … ICE-T AND COCO’s SEX SECRETS … TEEN SENSATION TAYLOR MOMSEN … UFC BAD BOY NICK DIAZ … THE WALKING RIOT MISSY HYATT if you’re not subscribing, you’re missing something … and by the ways cheapos, it’s FREE! Yes, absolutely 100 percent FREE! What are you waiting for? Check it out HERE!

HERE IT IS … IN ALL ITS GLORY … THE PAULCANO / LAVA PROMO! 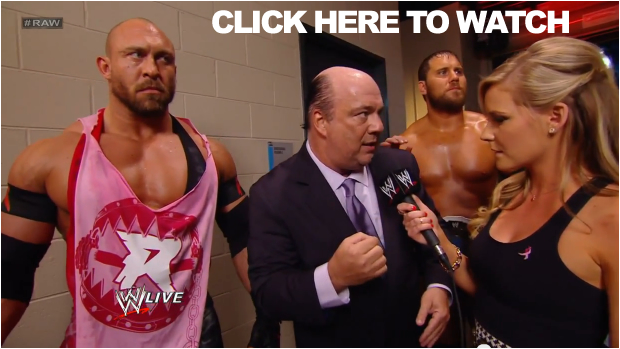