The Sad Fall of Ricky Hatton 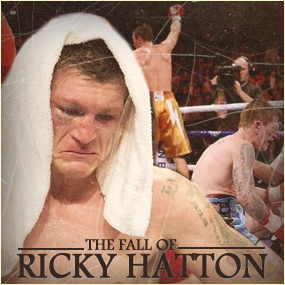 The Most Popular Boxer in UK History Hangs ‘Em Up After a Devastating Knockout in His Comeback Fight in Front of His Hometown Crowd!

Ricky Hatton has retired. And this time, he’s sure he’s not coming back. The Manchester, UK native had high hopes for his comeback after a three-and-a-half year hiatus, but his knockout loss to Vyacheslav Senchenko had confirmed to Hatton his worst fears: his boxing skills are gone.

“I needed one more fight to see if I had still got it, and I haven’t,” said the 34-year-old Hatton, the former light-welterweight champion who dropped to 45-3. Those other two losses were to Manny Pacquiao, a loss that sent Hatton into a deep depression and a period of substance abuse; and Floyd Mayweather, who knocked Hatton out in Las Vegas in one of the most heavily-hyped boxing pay per views of the past decade.

Hatton was defeated by a body shot in the ninth round from the Ukrainian welterweight Senchenko.

“A fighter knows and I know it isn’t there anymore,” Hatton said. “It’s too many hard fights, I’ve burned the candle at both ends, I’ve put my body through the mire in and out of the ring but it doesn’t matter how hard I train, I couldn’t have done any better.”

Senchenko (33-1) met Hatton for the 10-round welterweight fight two months after losing his unbeaten record, along with his WBA welterweight title, in a ninth-round loss to Paulie Malignaggi.

Hatton started aggressively without landing anything of note, until a left hook and short right connected with Senchenko.

Although Senchenko, boasting a significant height and reach advantage, landed a body shot early in the second, Hatton looked like he was going to make a successful comeback as he evaded a hook to the jaw and landed one to the ribs.

Hatton continued to have success with a succession of left hooks thrown with his entire body weight behind them, but during the sixth round, Hatton’s body started to slow down.

Senchenko, who had picked up a cut under the left eye, landed a left hook on Hatton in the seventh and landed several powerful shots in the eighth.

Hatton was floored in the ninth by a left to the body that sent him crashing to the floor in agony, and he was in too much pain to rise despite backing from his home crowd.

“I found out tonight it isn’t there no more,” Hatton said. “I’m a straight-shooter and I tell the truth. I can look at myself in the mirror and tell myself I did my best, but there is always an excuse to find  I got in the best shape I possibly could but if I hadn’t been hit with that body shot I would have just scraped over the line with a points win and I honestly think I would still be telling you all the same thing (about retirement).”

Of course, we’re HustleTweeting about The Sad Fall of Ricky Hatton, and you’re more than welcome to join the conversation by following THE HEYMAN HUSTLE on Twitter HERE or write to us directly at hustleoncrave@gmail.com  Hey, have you checked out the Hustle’s Ultra High Quality You Tube Channel, with exclusive videos featuring OUR WORLD EXCLUSIVE WITH MIKE TYSON … BROCK LESNAR’S “HERE COMES THE PAIN” … ICE-T AND COCO’s SEX SECRETS … TEEN SENSATION TAYLOR MOMSEN … UFC BAD BOY NICK DIAZ … THE WALKING RIOT MISSY HYATT if you’re not subscribing, you’re missing something … and by the ways cheapos, it’s FREE! Yes, absolutely 100 percent FREE! What are you waiting for? Check it out HERE!