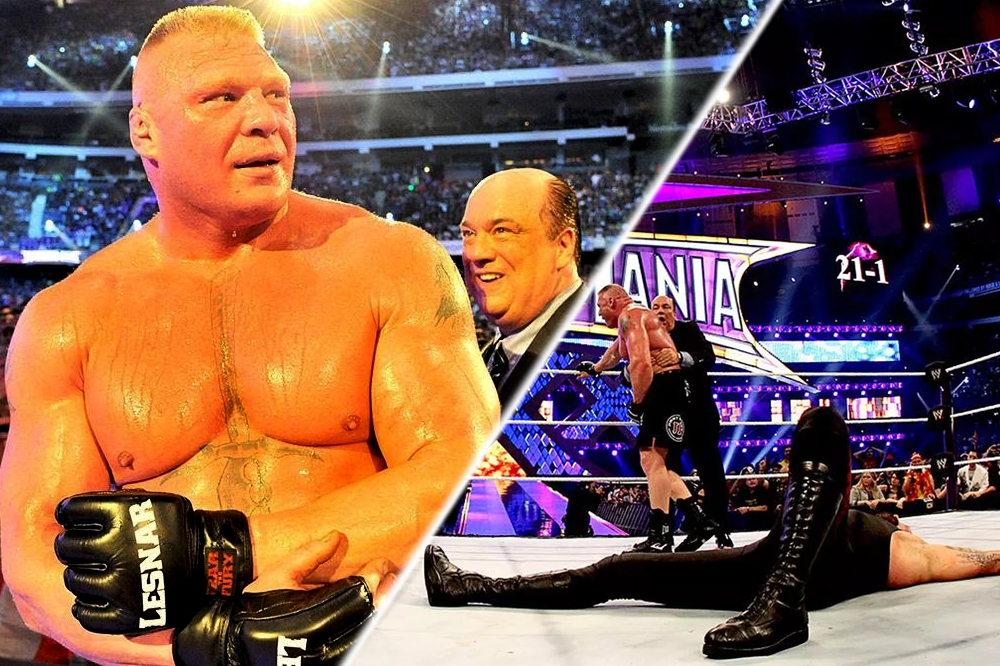 Our very own Hustler De Tuti Hustlers Paul Heyman guides The Beast Incarnate to the most monumental victory of this generation!

Brock Lesnar has defeated The Undertaker, ending the greatest streak in sports entertainment history. It’s the single biggest victory anyone in WWE could possibly achieve. Coverage of this history-shattering moment provided by WWE.com:

NEW ORLEANS — Records are made to be broken.

We’ve learned to accept these truths about many things in this world, but not The Undertaker’s Streak. It was WWE’s one constant — a decades-long unbeaten WrestleMania run that had never been done before, and will never be done again. Every year, The Deadman would face down a worthy adversary — be it Triple H, Shawn Michaels, his brother Kane — and every year he would add another number to his win column until it stood at a towering 21-0.

The Undertaker’s match against Brock Lesnar at WrestleMania was meant to make it 22-0. The Phenom would conquer The Beast — although he’d suffer a tremendous beating in the process— and he’d return at WrestleMania 31 to do it all over again.

However, stories don’t always end the way we want them to. And numbers never lie.

On April 6, 2014, Brock Lesnar did the very thing his T-shirt promised he would do: He beat The Streak.

It took countless punishing blows, multiple wrenching submissions and three F5’s, but Paul Heyman’s manmade monster became the first competitor to pin The Undertaker on The Grandest Stage Them All, and mark a 1 in The Deadman’s loss column.

There’s a story about the night Bruno Sammartino lost the WWE Title to Ivan Koloff in Madison Square Garden to end his 11-year reign as champion. The crowd was so quiet you could hear the whoosh of the cars passing on the street outside. A new generation of WWE fans will talk about the night The Undertaker lost with the same reverence. The sound of 75,167 rowdy people going silent all at once? It’s indescribable.

To see The Streak end was the single most shocking moment in the grand history of WWE. No one imagined it could happen. Even The Undertaker himself had made his victory all but guaranteed by preparing a specially made casket for Lesnar, which sat at the top of the entrance ramp next to a long row of coffins — one for each of The Deadman’s WrestleMania victims.

If Brock was intimidated by this psychological freak-out, he didn’t show it. As an athlete who fist fought the world’s most dangerous men inside cages for a living, Lesnar doesn’t scare easily, and he went at The Undertaker from the opening bell with an unbridled rage that has become his trademark.