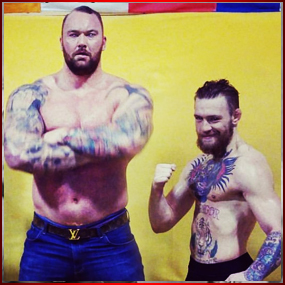 What you see on the video may be quite deceiving…

While many fans of the HBO series were impressed with Björnsson‘s fighting skills, it truly needs to be noticed that McGregor was simply dancing around and throwing playful jabs to the monstrous giant mid-section. While some online commented how hard those shots seemed, its obvious that McGregor rightfully exploited the photo op towards the publicity it was worth. Has McGregor ever felt threatened by the actor? We here at THE HEYMAN HUSTLE suggests the notorious Irishman would have swarned Björnsson with punches, leg kicks and takedown attempts, none of which the HBO star would have been prepared to defend against.

We’re not criticizing McGregor, nor UFC for taking advantage of the publicity they got from this viral video, we’re just pointing out the truth behind the images that flash before your eyes. The Mountain is one of the best characters on any television series, and we only wish boxing, UFC and WWE took note in the build up of this capital BAMF. But let’s not be fooled by the height behind the photo op. Connor McGregor is a real life fighter. There’s only one true BAMF in this video, and its the one the general public would foolishly believe is the “little guy” being toyed with by his dominant advicary.

Of course we’re HustleTweeting about Connor McGregor vs. The Mountain and you’re more than welcome to join by following the Hustle on Twitter HERE or write to us directly at hustleoncrave@gmail.com Hey, have you checked out the Hustle’s Ultra High Quality You Tube Channel, with exclusive videos featuring the #HUSTLEBOOTYTEMPTATS SUPERMODEL OF THE YEAR … OUR WORLD EXCLUSIVE WITH MIKE TYSON … BROCK LESNAR’S “HERE COMES THE PAIN” … ICE-T AND COCO’s SEX SECRETS … MMA BAD BOY NICK DIAZ … the list goes on and on, so if you’re not subscribing, you’re missing something … and by the ways cheapos, it’s FREE! Yes, absolutely 100 percent FREE! What are you waiting for? Check it out HERE!

CHECK OUT CONNOR MCGREGOR VS. THE MOUNTAIN! 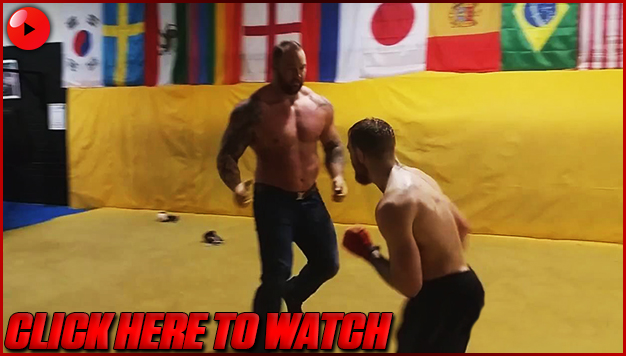