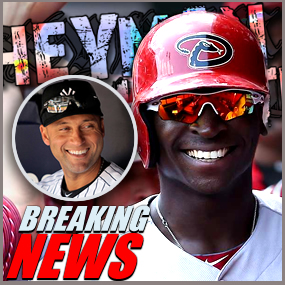 The Bronx Bombers started with a three-way-trade that brings Gregorius to NY from the Diamondbacks and sent emerging starter Shane Greene to the Tigers. Then the Yankees landed Andrew Miller, a shutdown lefty reliever. All in a days work for Brian Cashman!

The Bronx became a blazing hot inferno of behind the scenes activity this week, as The New York Yankees acquired a potential replacement for Derek Jeter at shortstop, and added a elite bullpen ace in free agent Andrew Miller. All eyes have been on Major League Baseball’s most famous team to make the first move in the Post-Jeter New York, and it finally happened Friday when the three-way-trade was announced.

Didi Gregorius comes to New York from the Diamondbacks, as the Yankees sent emerging starter Shane Greene to the Detroit Tigers.
Then the Yankees landed Miller, a shutdown lefty reliever who bolsters one of the Bombers’ few strengths from last year, the relief corps. Miller agreed to a four-year contract worth $36 million. Not a bad gig, if you ask us.

“We’ve been trying to get stuff done all winter,”  Brian Cashman  (the General Manager for the New York Yankees) said.

Continuing, Cashman stated, “I know today seems splashy because it’s two in one day. I wish I could’ve gotten stuff done earlier. We were able to push through on two things. Hopefully we’ll have some more things we feel good enough about to push through on.”

The New York Mets had talked to the Diamondbacks about Gregorius earlier this winter, but multiple sources noted the Arizona ballclub wanted Noah Syndergaard in return, which destroyed any chance of the potential deal from happening.

Miller’s arrival could affect David Robertson’s tenure in pinstripes, although Cashman wouldn’t rule anything out, saying, “We’re still evaluating all opportunities in this marketplace.”

Gregorius, a left-handed hitter who will be 25 in February, has the unenviable task of replacing a franchise icon following Jeter’s retirement. Nevertheless, he’ll have to earn the full-time gig. Cashman predicted that Gregorius would have to at least begin the year platooning with Brendan Ryan at least  “until he separates himself.” Gregorius struggles against lefties; his career average against them is .184.

“He’s a very young, athletic shortstop,” Cashman said. “Defense is very good. There’s more in the tank there as he continues to develop. He’s an exciting talent, but obviously he’s not a finished product. If he can close the gap to where he potentially can be, we could have one heckuva player on our hands.”

The paper also quoted Cashman as saying he’s been after Gregorius “not just this winter, but this past season and in past seasons.” He’s not worried about whether all the eyeballs bound to be on Jeter’s replacement may affect Gregorius.

“It’s not something I’m going to worry about or can worry about,” Cashman said. “No one can replace Derek Jeter. He was one in a billion. He’s not replacing Derek. He’s going to come in here and compete to hold down that position and try to provide excellent defense in the back of that lineup.”

Gregorius first burst onto the major league scene as a promising shortstop when he hit .252 in 103 games for the Diamondbacks in 2013. However, he was unable to hold the first-string shortstop job last season, hitting only .226 with a .290 on-base percentage and a .363 slugging percentage in 80 games. Gregorius, who was born in the Netherlands and raised primarily in Curacao, hit six homers and knocked in 27 runs. He was signed by Cincinnati in 2007 as an amateur free agent and was sent to Arizona by the Reds in a three-team trade that also involved the Indians.

After that deal was completed, then-Arizona GM Kevin Towers was quoted saying of Gregorius, “When I saw him, he reminded me of a young Derek Jeter.

Of course, we’re HustleTweeting about The New York Yankees … Didi Gregorius … and Derek Jeter, and you’re more than welcome to join the conversation by following the Hustle on Twitter HERE or write to us directly at hustleoncrave@gmail.com Hey, have you checked out the Hustle’s Ultra High Quality You Tube Channel, with exclusive videos featuring OUR WORLD EXCLUSIVE WITH MIKE TYSON … BROCK LESNAR’S “HERE COMES THE PAIN” … ICE-T AND COCO’s SEX SECRETS … MMA BAD BOY NICK DIAZ … the list goes on and on, so if you’re not subscribing, you’re missing something … and by the ways cheapos, it’s FREE! Yes, absolutely 100 percent FREE! What are you waiting for? Check it out HERE!