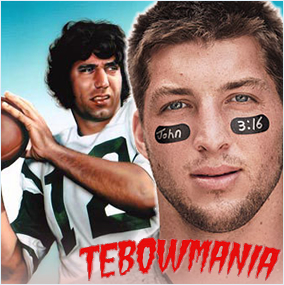 Is Broadway Joe Just Another Bitter Old Timer, or Does The Miracle Kid of Super Bowl III Have a Valid Point?

For kids who grew up during the Joe Namath Era of New York Football, the fact that the NFL Hall of Fame Quaterback is now 69 years old is a true sign of age. The original media whore of the New York Jets football franchise has come out swinging against the Tim Tebow trade, and Joe Willie’s holding nothing back.

The aging former superstar spoke to Michael Kay and Don La Greca on ESPN New York 1050 on Wednesday while the Jets and Broncos were trying to work through a reported holdup in the proposed trade. Kay asked Namath if he hoped the deal would ultimately fall apart.

The first “Madison Avenue” franchise quaterback said he thought the Jets acquiring Tebow was bad for the team, especially consider they already have a starting quaterback in Mark Sanchez.

“I don’t think they know what they’re doing over there right now,” Joe stated. “They give Sanchez a new contract, they pat him on the back and then they bring in two more quarterbacks.”

The Tebow Trade came less than week after the Jets signed Drew Stanton to be Sanchez’s backup.

“I think Sanchez should be angry about what’s taken place,” Joe stated. “Is this the Jets’ way of shoving (rookie backup QB Greg)  McElroy out of the way? … I’m baffled. I just think they’re kind of mixed up over there, and I’m talking about the folks that are making the decisions. The owner of the team says they’re not interested in Peyton Manning, and that’s good, but meantime they end up being interested in Tebow? Come on, this is crazy.”

Of course, we’re HustleTweeting about Tebow-Mania and Broadway Joe, so please feel free to join the conversation by following THE HEYMAN HUSTLE on Twitter HERE or write to us directly at hustleoncrave@gmail.com  Hey, have you checked out the Hustle’s Ultra High Quality You Tube Channel, with  exclusive videos featuring BROCK LESNAR’S “HERE COMES THE PAIN”  … ICE-T AND COCO’s SEX SECRETS … THE ULTIMATE WELTERWEIGHT BAD ASS NICK DIAZ … CONTROVERSIAL TEEN SENSATION TAYLOR MOMSEN … LEGENDARY MMA PIONEER FRANK SHAMROCK … THE WALKING RIOT MISSY HYATT … if you’re not subscribing, you’re missing something … and by the ways cheapos, it’s FREE! Yes, absolutely 100 percent FREE! What are you waiting for? Check it out HERE!