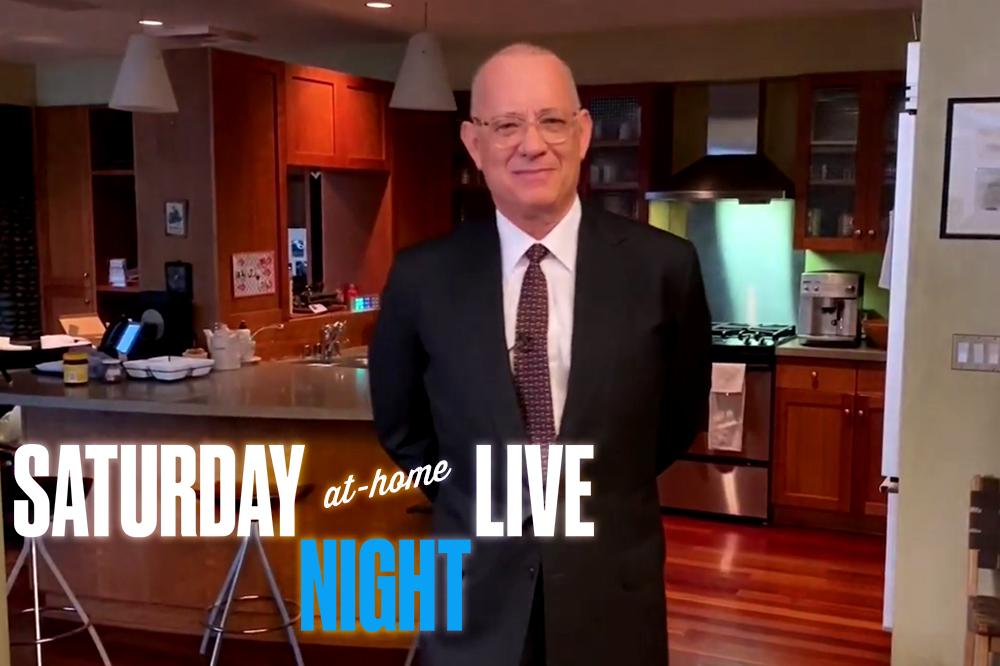 SNL went live Saturday night … although it was the most unique episode in the history of the entire program.

According to Page Six:

“Saturday Night Live” emerged from the pandemic quarantine ashes with a fresh, if unconventional, episode Saturday night — including a cold opening “Zoom” montage with cast members phoning it in from their own kitchens and living rooms.

“I have been the celebrity canary in the coal mine for the coronavirus,” Hanks explained of his hosting qualifications.

Hanks and wife Rita Wilson spent their virus convalescence in Australia, where doctors taking his temperature in Celsius would tell him, “Yeah, you’re 36!”

“Turns out, 36 is fine, but 38 is bad” Hanks quipped — “kind of like how Hollywood treats actresses.”

In one hilarious sketch, Kate McKinnon reprised her Ruth Bader Ginsburg impersonation, portraying the justice working out in sweats and a lace jabot.

As her honor, McKinnon pressed barbells made out of Q-tips, and showed the audience her “punching bags,” a pair of tea bags — one labeled “Kavanaugh,” the other “Gorsuch,” after President Trump’s appointees to the Supreme Court bench, Brett Kavanaugh and Neil Gorsuch.

“You’re gonna pee a little, every time you move,” she said while jogging feebly. “That’s normal.”

At one point, she shouted, still in character, “Dr. Fauci! Answer my DMs!”

“They say the virus came from a sick bat,” she said at another point. “Which makes me wonder — what was Giuliani doing in China?”

Alec Baldwin phoned in a President Trump impersonation, and Larry David reprised his Bernie Sanders, opining from an armchair, “Always the bridesmaid, never the Democratic nominee.”

“Sanders” insisted he was doing fine, despite the coronavirus pandemic and dropping out of the 2020 presidential race.

“Please, I’m a 78-year-old man living in Vermont. I have a whole room full of toilet paper,” he joked.

In fact, the quarantine and dropping out of politics will give him the much-needed chance to catch up on things, he said, explaining, “I finally have the time to relax and finish that heart attack from October.”

We’re HustleTweeting about SNL and you’re more than welcome to join the conversation on the Hustle Twitter HERE and also on our hyper-interactive Facebook page HERE!