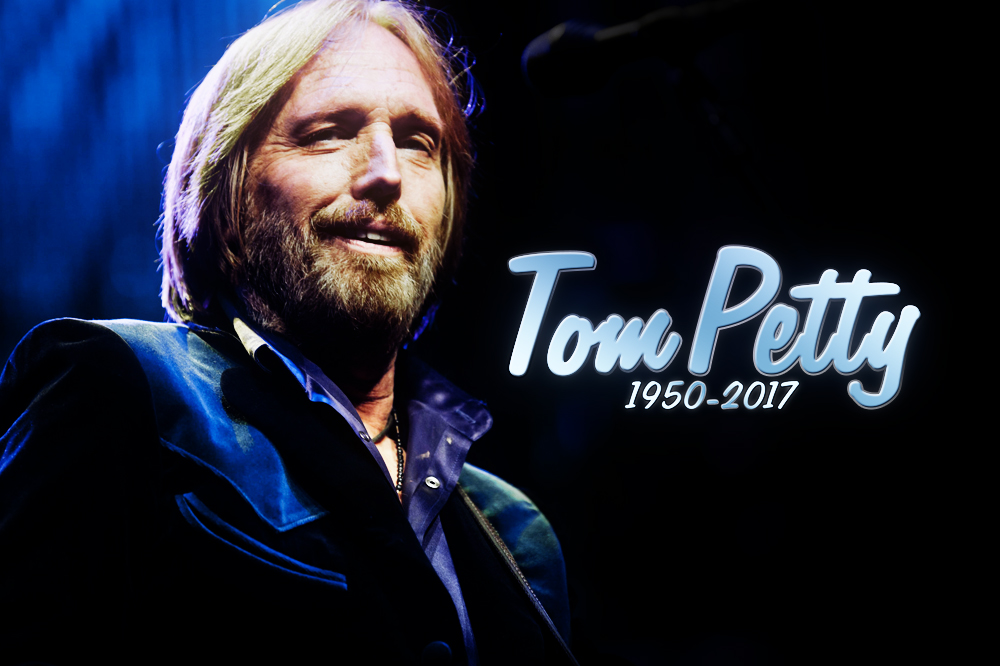 Tom Petty passed away at the age of 66, and the world has lost a truly magnificent musician. The rocker, who just wrapped up his most recent tour, was one of the true rock voices of his generation. The New York Times reports:

Tom Petty, a singer, songwriter and guitarist who melded California rock with a deep, stubborn Southern heritage to produce a long string of durable hits, died on Monday in Los Angeles. He was 66.

Tony Dimitriades, Mr. Petty’s longtime manager, said in a statement that Mr. Petty suffered cardiac arrest at his home in Malibu, Calif., early Monday morning and was taken to the U.C.L.A. Medical Center, where he could not be revived. He was pronounced dead at 8:40 p.m. with family members, friends and bandmates present at the hospital, Mr. Dimitriades said.

Recording with the Heartbreakers, the band he formed in the mid-1970s, and on his own, Mr. Petty wrote pithy, hardheaded songs that gave a contemporary clarity to 1960s roots. His voice was grainy and unpretty, with a Florida drawl that he proudly displayed.

His songs were staples of rock radio for decades, and with hits like “Refugee,” “Don’t Come Around Here No More,” “Free Fallin’ ” and “Into the Great Wide Open,” Mr. Petty sold millions of albums and headlined arenas and festivals well into 2017. He played the Super Bowl halftime show in 2008 and entered the Rock & Roll Hall of Fame in 2002.

But his songs stayed down-to-earth, with sturdy guitar riffs carrying lyrics that spoke for underdogs and ornery outcasts. In his 1989 hit, “I Won’t Back Down,” he sang, “You can stand me up at the gates of hell / But I won’t back down.”

Mr. Petty’s songwriting was shaped by the music he heard growing up: the ringing folk-rock guitars of the Byrds, the crunch of the Rolling Stones, the caustic insights of Bob Dylan, the melodic turns of the Beatles, the steadfast backbeat of Southern soul, and the twang of country-rock. Onstage, the Heartbreakers sometimes expanded songs toward psychedelia-tinged jams.

But across styles, Mr. Petty kept his songwriting tight-lipped, succinct and evocative. “She was an American girl, raised on promises,” he sang on Tom Petty and the Heartbreakers’ 1976 debut album. “She couldn’t help thinkin’ / That there was a little more to life somewhere else.”

There was scrappy defiance in both his lyrics and his career choices. “I turned anger into ambition,” he told one interviewer. “Any sort of injustice would outrage me. I couldn’t contain myself.”

In the late 1980s, Mr. Petty teamed up with some of his elders and influences to form the Traveling Wilburys, writing and recording with Mr. Dylan, George Harrison, Jeff Lynne and Roy Orbison. With his death, only Mr. Dylan and Mr. Lynne survive from that group. Mr. Orbison died in 1988 and Mr. Harrison in 2001.

Mr. Dylan responded immediately to reports of Mr. Petty’s death with a statement: “It’s shocking, crushing news. I thought the world of Tom. He was a great performer, full of the light, a friend, and I’ll never forget him.”

Mr. Petty made music with the Heartbreakers for more than 40 years, starting officially in 1976 in Los Angeles. The group grew out of Mudcrutch, the band Mr. Petty joined as a teenager in his hometown, Gainesville, Fla. Through decades of performing, he and the Heartbreakers steered clear of elaborate showmanship to let their songs and their musicianship speak for themselves.

Thomas Earl Petty was born on Oct. 20, 1950, the first child of Earl Petty, an insurance salesman, and the former Katherine Avery, who was known as Kitty.

In Warren Zanes’s “Petty: The Biography” (2015), Mr. Petty recalled a rough childhood with frequent beatings by his father. He did poorly in school, but turned to music, getting his first guitar in 1962 and soon, under the influence of the Beatles, growing long hair and switching to electric guitar. He joined his first band, the Sundowners, in the mid-1960s and was soon gigging around Gainesville.

Mudcrutch, which got started in 1970, included the guitarist Mike Campbell and the keyboardist Benmont Tench; they would become mainstays of the Heartbreakers. The group built a large local following in Florida, got a recording contract with Shelter Records and moved to Los Angeles. But the label lost confidence in the band and dropped it, keeping only Mr. Petty under contract. In 1974, he married Jane Benyo.

Mr. Petty tried recording with session musicians, but he preferred a steady band. He formed the Heartbreakers in late 1975 with Mr. Campbell, Mr. Tench and other musicians from Gainesville: Stan Lynch on drums and Ron Blair on bass. “I think we made the most of not knowing what the hell we were doing,” Mr. Petty said in Mr. Zanes’s biography.

The band’s 1976 debut album, “Tom Petty and the Heartbreakers,” made little impact until a tour of England put the album on the British charts. Then the single “Breakdown” made its way onto American radio, reaching No. 40 on the Top 40. Roger McGuinn of the Byrds recorded his own version of the Heartbreakers’ Byrds-style “American Girl.”

But Mr. Petty had signed away 100 percent of his publishing rights to Shelter for a $10,000 annual advance on royalties; he wanted to renegotiate. He won rights to 50 percent of future publishing royalties after the release of a fourth album.

The band’s second album, “You’re Gonna Get It!,” in 1978, included the singles “Listen to Her Heart” and “I Need to Know.” Another contract dispute followed after the ownership of Shelter changed. Mr. Petty sued Shelter’s new parent label, MCA, and declared bankruptcy, ending up in a legal limbo that delayed his next album until a new deal was reached.

“I like to devote my time and energy to being a musician,” he told The New York Times in 1981. “But sometimes there’s a communications breakdown and, when that happens, you just have to stand up for yourself.”

When it was eventually released in late 1979, “Damn the Torpedoes” was a blockbuster. With the singles “Don’t Do Me Like That” and “Refugee,” the album reached No. 2 on the Billboard album chart and sold more than 3 million copies.

Its success led to the next impasse. MCA planned to make Mr. Petty’s next album, “Hard Promises,” a flagship of what it called “superstar pricing”: $9.98 (more than $28 in today’s dollars) rather than $8.98. Mr. Petty, among other tactics, threatened to title it “The $8.98 Album,” and the price did not rise.

“MCA has done a great job selling our records, but they couldn’t see the reality of what it’s like on the street,” Mr. Petty said in 1981, the year “Hard Promises” was released. “They couldn’t see that raising the album’s price wouldn’t be fair.”

Through the 1980s, Mr. Petty and the Heartbreakers maintained a steady cycle of recording and touring, including a performance at the Live Aid concert, which was broadcast worldwide in 1985. Their hit singles included “You Got Lucky” and “Don’t Come Around Here No More.” Mr. Petty also had a hit duet with Stevie Nicks, “Stop Draggin’ My Heart Around.” He and the Heartbreakers had million-selling albums with “Hard Promises,” “Let Me Up (I’ve Had Enough)” in 1987 and “Into the Great Wide Open” in 1991, as well as “Southern Accents” in 1985.

Complacency did not set in. At one point during mixing sessions for “Southern Accents” — an album intended to examine Mr. Petty’s Southern roots — a frustrated Mr. Petty punched a wall so hard he fractured his left hand.

In 1986, he and the Heartbreakers played a 60-concert world tour with Bob Dylan, performing their own songs and then backing up Mr. Dylan.

The Traveling Wilburys were initially convened by Mr. Harrison, but their songs turned into jovial rockers with tag-team vocals on two Traveling Wilburys albums, released in 1988 and 1990. In another notable collaboration, Mr. Petty and most of the Heartbreakers backed Johnny Cash on his 1996 album, “Unchained.”

“Full Moon Fever,” released in 1989, was billed as a Tom Petty solo album, recorded with members of both the Heartbreakers and the Traveling Wilburys. With the Top 10 hit “Free Fallin’,” it became Mr. Petty’s most popular album, selling 5 million copies in the United States alone. A second nominally solo album, “Wildflowers” (1994), had Mr. Petty backed by most of the Heartbreakers; it, too, was a multimillion-seller, with the hit “You Don’t Know How It Feels.”

But “Wildflowers,” Mr. Petty said in “The Biography,” was also the harbinger of his divorce from Ms. Benyo in 1996. Living alone, he fell into heroin addiction, which he overcame through rehab before his marriage to Dana York in 2001.

Mr. Petty’s productivity briefly slowed but never stopped. In 1999, he and the Heartbreakers released one of their starkest albums, “Echo,” which reached the Top 10. In 2002, the group mocked a corporate-dominated music business with the album “The Last DJ.” And their 2014 album, “Hypnotic Eye,” reached No. 1 on the Billboard album chart, a testimonial to fans’ lingering loyalty in an era of diminished disc sales.

Mr. Petty’s music also reached a younger generation, as he headlined the Bonnaroo Music Festival in Tennessee in 2006 and 2013. “We’re one of those old, lucky bands,” he told Rolling Stone magazine in 2013. “Young people come to see us. It makes a difference.”

In 2013, Tom Petty and the Heartbreakers played extended residencies at the Beacon Theater in New York and the Fonda Theater in Los Angeles, reaching well past their hits. He also delved into his music collection with a Sirius XM radio show, “Tom Petty’s Buried Treasure,” which he began in 2005.

In 2007, Mr. Petty circled back to his beginnings when he reassembled Mudcrutch — with Mr. Tench and Mr. Campbell along with the band’s founding members Tom Leadon and Randall Marsh — to make a belated debut album and tour in 2007; a second album and tour followed in 2016.

Mr. Petty toured with the Heartbreakers for much of this year.

He is survived by his wife; a brother, Bruce; two daughters, Adria and AnnaKim; a stepson, Dylan Petty; and a grandchild.

Mr. Petty’s songs repeatedly proved their durability. A 1993 collection of “Greatest Hits,” including the single “Mary Jane’s Last Dance,” stayed on the Billboard album chart for six years. The presidential campaigns of Michele Bachmann and George W. Bush received cease-and-desist letters to deter them from playing Mr. Petty’s songs at campaign events. And in 2015, Sam Smith belatedly realized that the chorus of his hit “Stay With Me” had all too much in common with “I Won’t Back Down,” written by Mr. Petty and Mr. Lynne; he quickly shared the songwriting credit.

“A musical accident, no more no less,” Mr. Petty wrote in a typically laconic statement. “In these times we live in, this is hardly news.”

We’re HustleTweeting about Tom Petty, and you’re more than welcome to join the conversation on the Hustle Twitter HERE and also on our hyper-interactive Facebook page HERE!