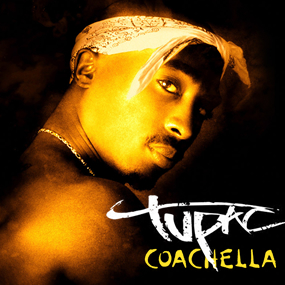 Dr Dre and Snoop Dogg Shock The Audience at Coachella By Performing on Stage with a Tupac Hologram, and The Business of “Live Concert Performance” May Never Be The Same Again! 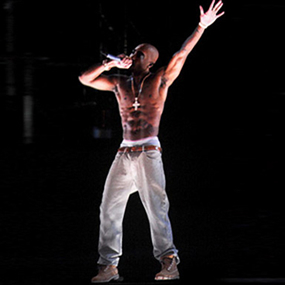 Dr Dre and Snoop Dogg Shock The Audience at Coachella By Performing on Stage with a Tupac Hologram, and The Business of “Live Concert Performance” May Never Be The Same Again!

Tupac Shakur appeared on stage and performed two songs at the Coachella music festival on Sunday night, as the high-definition projection of the gangsta rap icon appeared with Snoop and Dre in a remarkable, stunning end to the first weekend of the annual music festival in California, setting off a wild reaction of shock and awe as thousands in the crowd gasped as the shirtless Tupac, who was killed in a drive-by shooting in Las Vegas in 1996, rose up on the stage.

Amazingly life-like, all the way down to his signature tattoos, Timberland boots and bling, the Tupac hologram owned the stage, swapping phrases with Snoop Dogg and performing 2 of Amerikaz Most Wanted, Hail Mary, and Gangsta Party.

The stunt was the vision of long-time friend Dre, who sought permission from Tupac’s mother before commissioning the San Diego company AV Concepts, with the help of James Cameron’s Oscar-winning digital production company Digital Domain, to recreate him.

“We worked with Dr Dre on this and it was Dre’s vision to bring this back to life,” Nick Smith, president of AV Concepts, told MTV. ‘‘It was his idea from the very beginning and we worked with him and his camp to utilize the technology to make it come to life.”

Digital Domain is behind the digitally altered images of Brad Pitt in The Curious Case of Benjamin Button, Jeff Bridges in TRON: Legacy, and Rooney Mara in The Girl with the Dragon Tattoo.

A spokeswoman for Tupac’s mother, Afeni Shakur, told TMZ that she was ‘‘thrilled’’ with the latest recreation, although the experience was bittersweet. She did not attend Coachella but watched the performance live online.

The stunt set social media ablaze, with Tupac trending worldwide on Twitter and his name mentioned at least 40 times a minute. Rihanna, who was at the show, tweeted: ‘‘#TupacBACK #unbelievable #IWASTHERE #STORY4myGrandKidz.’’

Of course, we’re HustleTweeting about the Tupac Hologram, and what this means for the future of concert performance art, and you’re more than welcome to join the conversation by following THE HEYMAN HUSTLE on Twitter HERE or write to us directly at hustleoncrave@gmail.com  Hey, have you checked out the Hustle’s Ultra High Quality You Tube Channel, with  exclusive videos featuring BROCK LESNAR’S “HERE COMES THE PAIN”  … ICE-T AND COCO’s SEX SECRETS … THE ULTIMATE WELTERWEIGHT BAD ASS NICK DIAZ … CONTROVERSIAL TEEN SENSATION TAYLOR MOMSEN … LEGENDARY MMA PIONEER FRANK SHAMROCK … THE WALKING RIOT MISSY HYATT … if you’re not subscribing, you’re missing something … and by the ways cheapos, it’s FREE! Yes, absolutely 100 percent FREE! What are you waiting for? Check it out HERE!

HERE’S THE VIDEO THAT HAS THE ENTIRE WORLD TALKING! 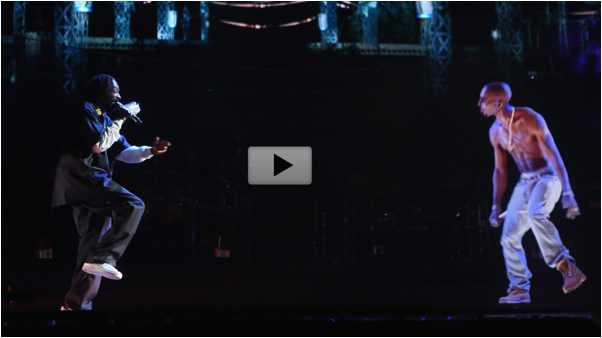