Despite Public Respect, Lots of Underlying Tension Between Chris Leben and Yoshihiro Akiyama 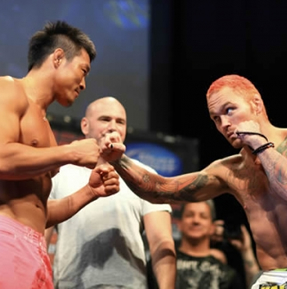 On June 21, when Wanderlei Silva was forced to pull out of his fight against Yoshihiro Akiyama in the co-main event of the biggest pay per view of the year, UFC 116, it set off a chain of events that are still reverberating today in Las Vegas.

UFC President Dana White jumped right into action, replacing the legendary Wanderlei with Chris Leben, who just fought on June 20 and came out of that victory without any significant injuries, so he’s already at peak fitness. Akiyama admitted to the media that he had waited several months to fight Silva, a legend of Japan’s former Pride Fighting Championships, because he wanted to lift his reputation with a victory against a marquee name. Faced instead with the prospect of switching to a lesser-known fighter, Akiyama balked asked for a bigger-name replacement.

Akiyama threatened not to fight.

Dana White got his way.

"It does bother me," Leben admits, "I’m sure he was really excited to fight Wanderlei, but things happen, and now I’ve got the fight. He needs to quit whining and moaning and just man up."

"I win this fight and this puts me back up in the top 10," Leben says, "As far as I’m concerned, I got to where I’m at by taking risks, by getting in the cage and rolling the dice."

The two collide this Saturday night, July 3rd at the MGM Grand Garden Arena in Las Vegas in the co-main event of the biggest pay per view of the year, UFC 116.

CLICK HERE TO SEE PHOTOS OF LEBEN AND AKIYAMA AT THE UFC 116 PRESS CONFERENCE, and  be sure to check out our exclusive photographs from the UFC 116 Weigh-Ins this afternoon from the MGM Grand Garden Arena in Las Vegas.

CLICK HERE FOR THE ENTIRE GALLERY OF CHRIS LEBEN
AND YOSHIHIRO AKIYAMA AT THE UFC 116 WEIGH-INS!