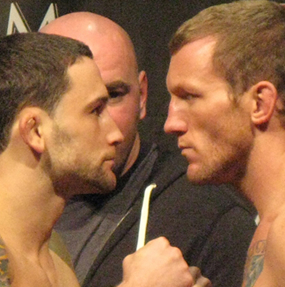 Frankie Edgar has been on a roll.  After defeating BJ Penn at UFC 112, many called his victory a fluke. But then when he dominated Penn a second time in a row at UFC 118 in Boston, Frankie Edgar proved he was a Lightweight Champion to be taken seriously.

Tonight, at UFC 125, he will try to avenge the only loss of his career when he steps into the Octagon against Gray Maynard.

“I just think I grew as a fighter (since the loss to Maynard),” Edgar said, “You know, mentally, physically, (my) skills increased. I think I boxed and got better, my jiu-jitsu got better and just have much more experience now.”

Maynard claims tonight will be no different. “(Our fight) was two and a half years ago,” the challenger noted,  “Any time you’re going up against the top in the world, you evolve and change, and so I’m prepared for a new fight. I’m pumped for it.”

We’re HustleTweeting about UFC 125, and you’re more than welcome to join the conversation! Follow THE HEYMAN HUSTLE on Twitter HERE or write to us at hustleoncrave@gmail.com