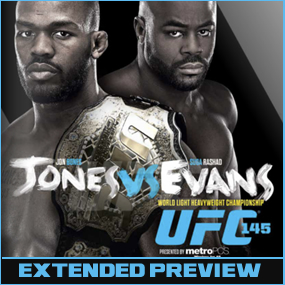 We’re Less Than 5 Weeks Away From The Most Bitter Grudge Match In Ultimate Fighting History!

The young undefeated champion against the older mentor who became his best friend. The best light heavyweight on the planet against a re-invigorated veteran who has toppled some of the true legends in the sport. Two former friends on a collision course, with the ultimate prize being the Undisputed Light Heavyweight Championship of the World.

On April 21st, THE 205-pound division of the Ultimate Fighting Championships will be front and center in the main event as “UFC 145: Jones vs. Evans” will unfold live on pay per view from the Philips Arena in Atlanta, Georgia. Jon Jones will defend his championship against his former stable mate Rashad Evans, and neither man seems to be willing to give the other the benefit of any doubt.

This is arguably the most heated personal dispute to ever go head-to-head in the Octagon, and we are now just under 5 weeks away from these two men being locked inside the fence in the spirit of championship competition at its very finest and most personal.

Of course, we’re HustleTweeting about “UFC 145: Jones vs. Evans” and you’re more than welcome to join the conversation by THE HEYMAN HUSTLE on Twitter HERE or write to us directly at hustleoncrave@gmail.com  Hey, have you checked out the Hustle’s Ultra High Quality You Tube Channel, with  exclusive videos featuring BROCK LESNAR’S “HERE COMES THE PAIN”  … ICE-T AND COCO’s SEX SECRETS … THE ULTIMATE WELTERWEIGHT BAD ASS NICK DIAZ … CONTROVERSIAL TEEN SENSATION TAYLOR MOMSEN … LEGENDARY MMA PIONEER FRANK SHAMROCK … THE WALKING RIOT MISSY HYATT … if you’re not subscribing, you’re missing something … and by the ways cheapos, it’s FREE! Yes, absolutely 100 percent FREE! What are you waiting for? Check it out HERE!

CHECK OUT THE EXTENDED PREVIEW FOR UFC 145: JONES VS EVANS! 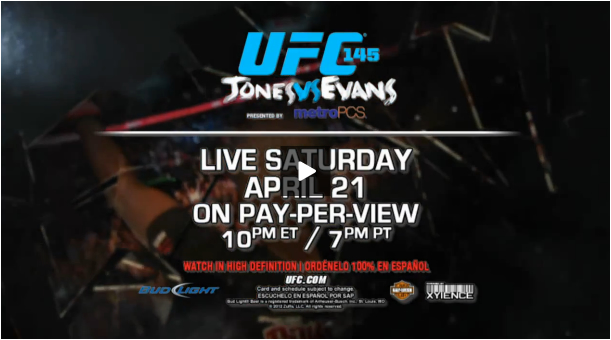