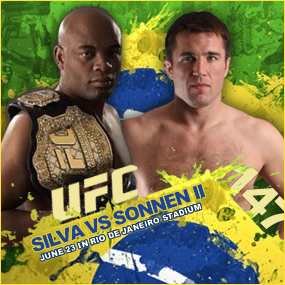 UFC 147 Is Set As The Biggest Event of the Year in Mixed Martial Arts!

UFC kicked off the week with a huge announcement this morning, as the world’s most dominant Mixed Martial Arts league confirmed UFC 147 will take place on June 23, 2012 at Engenhão Stadium, also known as Estádio Olímpico João Havelange in Rio de Janeiro.

“This will be the biggest sporting event of the year” beamed UFC president Dana White. “Bigger than the NFL, the NBA … you name it … UFC 147 will be the biggest. The whole world wants to see this fight between (Anderson) Silva and (Chael) Sonnen. We are broadcast in over 150 countries in 22 languages in half a billion homes. Wherever those fans are, they are going to be watching this fight.”

The stadium holds approximately 47,000 capacity for soccer matches, but Zuffa should be able to bump that number up considerably. This puts UFC’s all-time attendance record of 55,724, which was set last April at UFC 129 at Toronto’s Rogers Centre on notice. The Brazilians are coming!

Sonnen beat up the UFC Middleweight Champion of the World for almost five complete rounds at UFC 117 until falling victim to “The Spider” with only one minute and fifty seconds left in the fight.

In addition to Silva-Sonnen II, the middleweight showdown between “The Ultimate Fighter: Brazil” coaches Wanderlei Silva and Vitor Belfort is also confirmed for the mega-event.

Of course, we’re HustleTweeting about Anderson Silva vs Chael Sonnen II, and you’re more than welcome to join the conversation by following THE HEYMAN HUSTLE on Twitter HERE or write to us directly at hustleoncrave@gmail.com  Hey, have you checked out the Hustle’s Ultra High Quality You Tube Channel, with  exclusive videos featuring BROCK LESNAR’S “HERE COMES THE PAIN”  … ICE-T AND COCO’s SEX SECRETS … THE ULTIMATE WELTERWEIGHT BAD ASS NICK DIAZ … CONTROVERSIAL TEEN SENSATION TAYLOR MOMSEN … LEGENDARY MMA PIONEER FRANK SHAMROCK … THE WALKING RIOT MISSY HYATT … if you’re not subscribing, you’re missing something … and by the ways cheapos, it’s FREE! Yes, absolutely 100 percent FREE! What are you waiting for? Check it out HERE!