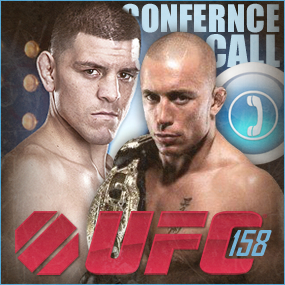 The Welterweight Champion of the World is lured into a heated argument with The Stockton Bad Boy as the media listens in stunned silence during what promised to be an explosive conference call … and boy did it over-deliver!

The tension started at the very top, when UFC President Dana White said Nick Diaz was not on the call. Problem number one. Diaz was on the line. From there, both Diaz and GSP professed respect for one another as fighters, but it quickly became apparent Nick Diaz was in a bad mood

“I just think that I should be given the credit that I deserve and that GSP should be given the decorated opponent that he deserves, and I’m hardly that from the fans’ perspective,” said Diaz. “That makes me pretty angry. I think that Georges is going to appreciate that and I think he knows I’m the right guy to be in this position.”

As the call progressed, a reporter asked GSP if he feels he is “pampered,” as Diaz has alleged. This is where Diaz went wild.  “I hope so, mother fucker!”  he yelled. “If I had that much money, I’d be fucking pampering myself the fuck up!”

The normally calm, cool and collected GSP retorted, “Let me tell you something, uneducated foo … I’ve not always been rich. I started from the bottom and I worked very hard to be where I am right now.”

The argument got more and more heated, with the two arguing who actually spoke better English. This is a must-hear conference call, and we have it, in its entirety, for you below!

CLICK HERE FOR OUR SPECIAL OFFER WHERE YOU CAN ORDER YOUR OFFICIAL NICK DIAZ UFC 158 WALKOUT T-SHIRT!

Of course, we’re HustleTweeting about UFC 158 GSP vs Nick Diaz, and you’re more than welcome to join the conversation by following us on twitter HERE or write us directly at hustleoncrave@gmail.com  Hey, have you checked out the Hustle’s Ultra High Quality You Tube Channel, with exclusive videos featuring OUR WORLD EXCLUSIVE WITH MIKE TYSON … BROCK LESNAR’S “HERE COMES THE PAIN” … ICE-T AND COCO’s SEX SECRETS … TEEN SENSATION TAYLOR MOMSEN … UFC BAD BOY NICK DIAZ … THE WALKING RIOT MISSY HYATT if you’re not subscribing, you’re missing something … and by the ways cheapos, it’s FREE! Yes, absolutely 100 percent FREE! What are you waiting for? Check it out HERE! 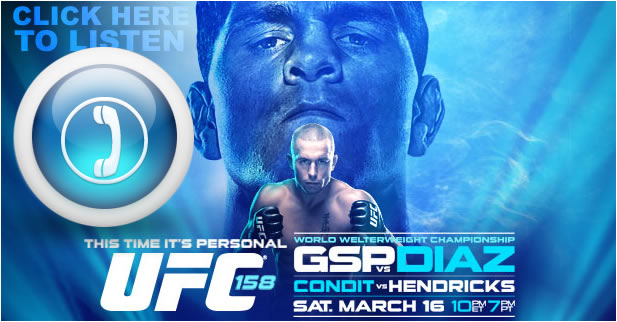