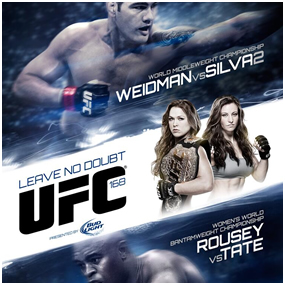 It’s been a year of shockers for the Ultimate Fighting Championships … who will be the fighter that leaves the biggest impression on the last show of 2013?

2013 was quite a year. Junior Dos Santos got his ass kicked by Cain Velasquez (not that Cain walked away unscathed). Georges St-Pierre got his ass kicked by Johny Hendricks (even though GSP won a controversial decision victory). Gray Maynard got smashed into tomorrow by Nate Diaz (the only controversy there is if the referee should have stepped in sooner).

With JDS … GSP … some of the sport’s most heralded “untouchables” being brought down to earth, one shocker out-shocked ’em all. Chris Weidman‘s ko victory over Anderson Silva, capitalizing on Silva clowning around (while dominating the hell out of Weidman) was one of the most memorable moments in UFC history. They will meet again at UFC 168 at the MGM Grand Garden Arena in Las Vegas. Oh yeah. Ronda Rousey quite possibly the most celebrated athlete this year in UFC and certainly one of the world’s most publicized new female sensations will once again face her bitter rival Meisha Tate with whom she had a wild one rounder (won, like ALL Rousey fights, via tap out to armbar) in Strikeforce.

Did we mention the titles are on the line?

If you’re still not stoked for this double main event, check out the hype video for UFC 168 featuring Anderson Silva … Chris Weidman … Ronda Rousey … Meisha Tate … UFC President Dana White … and Joe Rogan. Of course, wer’e HustleTweeting about UFC 168 and you’re more than welcome to join us by following THE HEYMAN HUSTLE and telling us what YOU think RIGHT F’N HERE! We got the whole social media thing covered, so check out the Hustle’s Ultra High Quality You Tube Channel, with exclusive videos featuring OUR WORLD EXCLUSIVE WITH MIKE TYSON … BROCK LESNAR’S “HERE COMES THE PAIN” … ICE-T AND COCO’s SEX SECRETS … TEEN SENSATION TAYLOR MOMSEN … UFC BAD BOY NICK DIAZ … THE WALKING RIOT MISSY HYATT if you’re not subscribing, you’re missing something … and by the ways cheapos, it’s FREE! Yes, absolutely 100 percent FREE! What are you waiting for? Check it out HERE!

THE COUNTDOWN BEGINS THE MOMENT YOU WATCH THIS VIDEO! 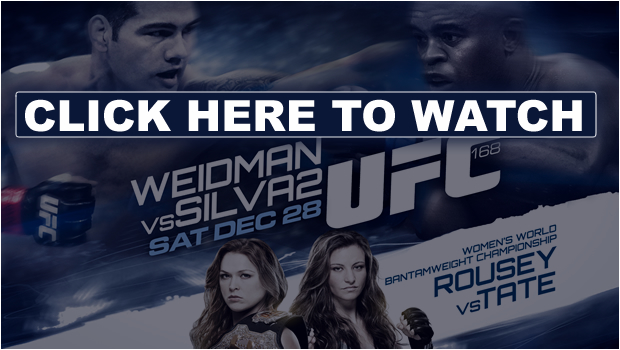