UFC's Biggest Fight of 2012 Will Be Delayed 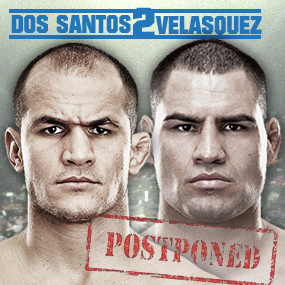 The Showdown For The Undisputed Heavyweight Championship of the World Between Junior Dos Santos and Cain Velasquez Will Not Take Place at UFC 152 on September 22nd. Here’s a Few Reasons Why …

During Saturday’s UFC 147 festivities, Dana White told FUEL TV, “The fight will happen, but probably not in Toronto.”

UFC 152 is slated for Toronto’s Air Canada Centre, and Dos Santos and Velasquez were expected to headline the pay-per-view main card, which also is expected to feature a hot welterweight fight which offers B.J. Penn (16-8-2 MMA, 12-7-2 UFC) vs. Rory MacDonald (13-1 MMA, 4-1 UFC).

Dana White didn’t confirm a reason for the delay, and Velasquez’s camp recently shot down reports of a possible broken hand suffered in training.

There is also the fact that reports are spreading UFC plans to return to Dos Santos’ home country of Brazil on October 13th for UFC 153. The rumors are widespread regarding that event, which would take place at HSBC Arena in Rio de Janeiro.

Dos Santos knocked out Valesquez in 64 seconds to become the UFC Heavyweight Champion in the main event of UFC on FOX 1.

Of course, we’re HustleTweeting about Junior Dos Santos vs Cain Velasquez, and you’re more than welcome to join the conversation by following THE HEYMAN HUSTLE on Twitter HERE or write to us directly at hustleoncrave@gmail.com  Hey, have you checked out the Hustle’s Ultra High Quality You Tube Channel, with  exclusive videos featuring BROCK LESNAR’S “HERE COMES THE PAIN”  … ICE-T AND COCO’s SEX SECRETS … THE ULTIMATE WELTERWEIGHT BAD ASS NICK DIAZ … CONTROVERSIAL TEEN SENSATION TAYLOR MOMSEN … LEGENDARY MMA PIONEER FRANK SHAMROCK … THE WALKING RIOT MISSY HYATT … if you’re not subscribing, you’re missing something … and by the ways cheapos, it’s FREE! Yes, absolutely 100 percent FREE! What are you waiting for? Check it out HERE!