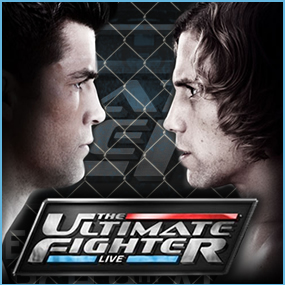 A few years ago, our very own Hustler De Tuti Hustlers Paul Heyman took a much different look at the “New” Monday Night War between WWE and TNA (which, we might add, did not last very long) by pointing out the real war was being fought behind the scenes between USA Network and Spike TV.

Just recently, when UFC announced it was leaving Spike and heading into a multi-year uber-lucrative deal with Fox (and F/X, Fuel, plus other related properties), Spike decided it was time to enter the Octagon themselves. Besides setting up the debut of Bellator in 2013, SPIKE UNLEASHED ITS VERY OWN MMA NEWS PROGRAM, and then decided to use THE RETURN OF KIMBO SLICE to lure audiences to watch their highlights from previous seasons of The Ultimate Fighter tv program.

UFC Bantamweight champion Dominick Cruz and former WEC Featherweight Champion Urijah Faber will be opposing coaches on the 15th season of “The Ultimate Fighter,” which debuts this Friday on F/X, and the true deep animosity between Cruz and Faber is apparent right off the bat in the series. The beef between the two began in the weeks leading up to their first fight when Faber submitted Cruz with a first-round guillotine choke at WEC 26 in 2007.

“I think it started off because of jealousy ever since I’ve been involved with the guy,” Faber said. “He was disrespectful from the get-go … I’m a guy that treats everyone with respect. For a guy to be disrespectful right off the bat before me and, especially, coming in as a challenger … I mean, basically, he’s an immature little punk. That was our first impressions of each other. And since then we’ve had to fight each other over and over again, so I guess that doesn’t make for the best relationship.”

The rivalry picked up steam when Cruz, in their rematch, defeated Faber with a five-round unanimous decision to capture the UFC 135-pound title at UFC 132 in July 2011.

“Faber thinks he is above everybody and unless you bow down and say, ’You are Urijah Faber, you built whatever division and Oh my gosh, you’re Urijah Faber. Did I tell you, you are Urijah Faber,’” Cruz said emphatically. “Unless you do that he doesn’t like you. He’s a self-proclaimed alpha male. Well, I don’t care what you call yourself. I’m tougher than you, I beat you already and I’m going to beat you again. As much as you think you tougher than me or better than me, you couldn’t be more wrong. I can’t wait to prove it and shut him up.”

Faber said The Ultimate Fighter Season 15 is a great opportunity to bring more attention to the lighter weight classes. Thirty-two 155-pound contestants will be vying for a UFC contract, and then Faber and Cruz will meet at UFC 148 on July 7 in Las Vegas for the Bantamweight Championship of the World.

“I’m excited,” Faber said. “(This) opportunity …  is great. They get to learn who I am and decide whether they like me or not and see the guys I surround myself with and my mentality and coaching ability. On top of that we’ll be building up this fight (at UFC 148) …  It’s important that people care. Dominick is an elite champion and people will get to learn about him. This is a great opportunity for both of us.”

“It’s a brand new format,” Cruz stated, referring to the fact the actual fights on The Ultimate Fighter show will be broadcast live this year.  “These guys are what is going to make this show because now that everything is live I really believe it’s going to raise the temperature in the room on fight day even higher. They know that millions of people are watching for free. It’s almost like being in the UFC before you are in the UFC. These guys are going to be stoked. It’s going to make the fights that much better.”

Of course, we’re HustleTweeting about Cruz vs Faber, and the new season of The Ultimate Fighter, and you’re more than welcome to join the conversation right now by following THE HEYMAN HUSTLE on Twitter HERE or write to us directly at hustleoncrave@gmail.com  Hey, have you checked out the Hustle’s Ultra High Quality You Tube Channel, with  exclusive videos featuring BROCK LESNAR’S “HERE COMES THE PAIN”  … ICE-T AND COCO’s SEX SECRETS … THE ULTIMATE WELTERWEIGHT BAD ASS NICK DIAZ … CONTROVERSIAL TEEN SENSATION TAYLOR MOMSEN … LEGENDARY MMA PIONEER FRANK SHAMROCK … THE WALKING RIOT MISSY HYATT … if you’re not subscribing, you’re missing something … and by the ways cheapos, it’s FREE! Yes, absolutely 100 percent FREE! What are you waiting for? Check it out HERE!