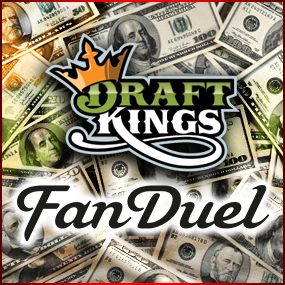 The Legal Battle For Survival Commences Today in The State of New York!

The very survival of controversial sites DraftKings and FanDuel may be on the line, as New York’s attorney general has filed a lawsuit against the two companies, demanding they give back all the money they have made in the state, potentially crippling the popular daily fantasy sports websites. The amended lawsuit, filed on Thursday in advance of today’s court date,  demands not only the return of the money, but a fine of up to $5,000 per case.

The sites have said they took in more than $200 million in entry fees from at least 600,000 customers in New York state.

David Boies, a high-powered attorney for DraftKings, said in a statement that the lawsuit was “baseless” and “reveals that the attorney general’s office still does not understand fantasy sports.” A spokesman for FanDuel declined to comment.

New York State Attorney General Eric Schneiderman asserts that the companies are operating an illegal gambling operation within New York. He first filed a lawsuit in November and was granted a temporary injunction on December 11 to stop FanDuel and DraftKings from operating within the state, but that decision was reversed hours later by an appellate court.

Both sides are set to argue Monday before an appellate panel as to whether the companies may continue to operate in New York as the case proceeds to a trial stage.

In the new filing, the attorney general zeroed in on user bonuses that he believes are deceptive, saying they offer hundreds of dollars in bonuses that would unlock only after users spent thousands on the site. That type of incentive advertising is a common practice in Las Vegas casinos.

Schneiderman also has argued that the companies, which both have aggressive advertising campaigns, misrepresent the chances of winning. In 2013 and 2014, only 11.7 percent of DraftKings users made money, according to the complaint.

Both Boston-based DraftKings and New York-based FanDuel have argued that daily fantasy is a game of skill, not chance, and insist that their operations are legal because they technically don’t accept wagers and because their success doesn’t rely on any particular result.

The two sites have come under scrutiny in other states. They stopped operating in Nevada after the state’s gaming commission declared what they did was gambling and would require licenses. Last month, Illinois Attorney General Lisa Madigan moved to block the sites from operating in that state. Both have countersued.

The companies combined to take in more than $3 billion in 2015 and have established partnerships with the NFL, Major League Baseball and ESPN.

Of course, we’re HustleTweeting about The State of New York V DraftKings and FanDuel, and you’re more than welcome to join the conversation by following the Hustle on Twitter HERE or write to us directly at hustleoncrave@gmail.com Hey, have you checked out the Hustle’s Ultra High Quality YouTube Channel, with exclusive videos featuring the #HUSTLEBOOTYTEMPTATS SUPERMODEL OF THE YEAR … OUR WORLD EXCLUSIVE WITH MIKE TYSON … BROCK LESNAR’S “HERE COMES THE PAIN” … ICE-T AND COCO’s SEX SECRETS … MMA BAD BOY NICK DIAZ … the list goes on and on, so if you’re not subscribing, you’re missing something … and by the ways cheapos, it’s FREE! Yes, absolutely 100 percent FREE! What are you waiting for? Check it out HERE!