Woody Allen To Try Something New in a Big Big Way 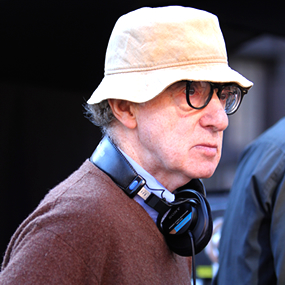 … and the entire world of entertainment is rocked!

Woody Allen has signed to create, write and direct his first-ever television show … on Amazon! The studio announced this morning that Allen will write and direct a half-hour series currently known as Untitled Woody Allen Project. The company has already ordered a full season, which will be made available on Amazon Prime Instant Video in the US, UK and Germany.

“Woody Allen is a visionary creator who has made some of the greatest films of all time, and it’s an honor to be working with him on his first television series,” Roy Price, vice president of Amazon Studios, said in a statement. “From Annie Hall to Blue Jasmine, Woody has been at the creative forefront of American cinema and we couldn’t be more excited to premiere his first TV series exclusively on Prime Instant Video next year.”

“I don’t know how I got into this,” Allen said in a statement of his own. “I have no ideas and I’m not sure where to begin. My guess is that Roy Price will regret this.”

Allen’s next feature film, a currently untitled project with Joaquin Phoenix and Emma Stone, is scheduled for release this year. Of course, we’re HustleTweeting about Woody Allen and Amazon, and you’re more than welcome to join the conversation by following the Hustle on Twitter HERE or write to us directly at hustleoncrave@gmail.com Hey, have you checked out the Hustle’s Ultra High Quality You Tube Channel, with exclusive videos featuring OUR WORLD EXCLUSIVE WITH MIKE TYSON … BROCK LESNAR’S “HERE COMES THE PAIN” … ICE-T AND COCO’s SEX SECRETS … MMA BAD BOY NICK DIAZ … the list goes on and on, so if you’re not subscribing, you’re missing something … and by the ways cheapos, it’s FREE! Yes, absolutely 100 percent FREE! What are you waiting for? Check it out HERE!