In One Of The Most Memorable Segments EVER on WWE Monday Night RAW, Paul Heyman Talks To Roman Reigns, Who Goes Face-To-Face with Brock Lesnar 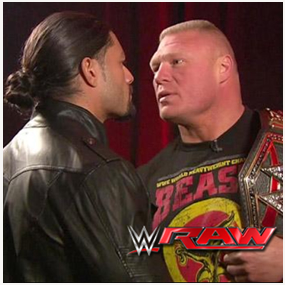 A Historic RAW Ends With A Scene Not Soon To Be Forgotten!

With WWE Monday Night RAW broadcasting LIVE from the world headquarters in Stamford, it was inevitable that Undisputed WWE World Heavyweight Champion Brock Lesnar and Roman Reigns would come face-to-face. But when our boss, the Hustler De Tuti Hustlers Paul Heyman decided to tell his own history with the Samoan family, and Brock’s history with The Rock, the closing segment on RAW became epic.

It’s not in the middle of an arena with thousands of screaming fans, but the inaugural staredown between Brock Lesnar and his No. 1 contender Roman Reigns was almost tenser given that it took place inside a confined space with civilian workers in close proximity. As ever, the meeting of the two monsters did not disappoint, with Reigns standing defiantly before an unimpressed Lesnar after Paul Heyman literally unseated Michael Cole to conduct the interview. For all of Reigns’ calmness in the presence of Lesnar, it was The Anomaly who threw the first salvo, instigating the first nose-to-nose confrontation between the two and offering a hollow handshake to get in his opponent’s head. Reigns got the last word, however, promising The Beast he would respect his challenger before all was said and done. Only 62 days to go.

Of course, we’re HustleTweeting about Brock Lesnar (w/ Paul Heyman) vs Roman Reigns at WrestleMania, and you’re more than welcome to join the conversation by following the Hustle on Twitter HERE or write to us directly at hustleoncrave@gmail.com Hey, have you checked out the Hustle’s Ultra High Quality You Tube Channel, with exclusive videos featuring OUR WORLD EXCLUSIVE WITH MIKE TYSON … BROCK LESNAR’S “HERE COMES THE PAIN” … ICE-T AND COCO’s SEX SECRETS … MMA BAD BOY NICK DIAZ … the list goes on and on, so if you’re not subscribing, you’re missing something … and by the ways cheapos, it’s FREE! Yes, absolutely 100 percent FREE! What are you waiting for? Check it out HERE! 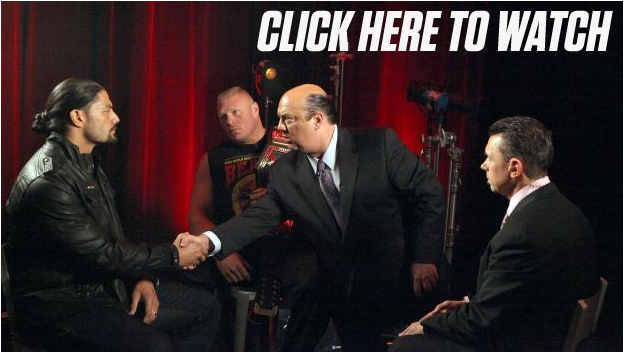