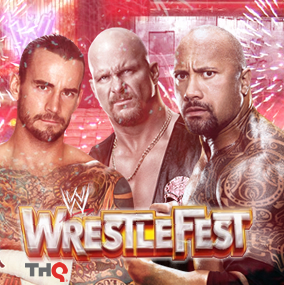 There’s a brand new WWE game out from THQ, and both companies are pinning high hopes on the launch. WWE WrestleFest, a 2-D experience for iPhone and iPad based on the well-known WWE arcade game made popular in the 1990s, will become available Tuesday, February 21st, and expectations for the game are high.

The game features modern day WWE Superstars, prominent WWE Legends, an extensive downloadable content program, Road to WrestleMania progression play and multiplayer functionality. WWE  and THQ announced that WrestleFest will be available through Apple’s App Store for the suggested retail prices of US $2.99 (iPhone) and US $3.99 (iPad).

The game features everyone from, John Cena, to The Rock, Randy Orton to “Stone Cold” Steve Austin, Undertaker to, Jake “The Snake” Roberts and even “Macho Man” Randy Savage.  There’s a lot of buzz for the game, which will explore arcade-style WWE action across a variety of match types, including Royal Rumble, Tag Team, Gauntlet and Steel Cage, while competing in a number of renowned arenas like Raw, SmackDown, WrestleMania and Saturday Night’s Main Event.  The Road to WrestleMania progression-style mode will encourage players to select a WWE Superstar or WWE Legend and compete in a series of challenges to win five different WWE Championships, while wireless connectivity through Apple Game Center will enable them to issue multiplayer challenges.