Yankees vs Red Sox in Boston Tonight, But A-ROD Will Be Sitting on the Bench 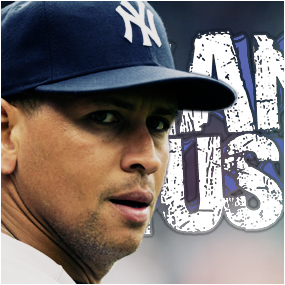 The Heyman Hustle has learned that Alex “A-ROD” Rodriguez will have to wait one more day to continue his pursuit of tying Willie Mays for fourth on the all-time list. With Boston Red Sox right-hander Justin Masterson on the mound, the Yankees entire lineup Friday consists of left-handed hitters and switch-hitters.

“My job is not to get caught up in milestones in a sense, but what is the best lineup you can field that day,” Yankees manager, Joe Girardi said. “But I do want to get it out of the way. I think as much as a player you try not to think about it, its’ impossible.“

Taking Rodriguez’s place Friday will be left-handed designated hitter, Garrett Jones. Girardi says “It’s the product of Masterson and the success that left-handers have had off him the last couple of years compared to right-handers. We threw in everybody we had.”

A-ROD will now have two consecutive days off for the first time this season. Rodriguez will reclaim his place in the starting lineup this Saturday against the Boston Red Sox.

Of course, we’re HustleTweeting about Alex Rodriguez’s chase to Willie Mays, and you’re more than welcome to join the conversation by following The Heyman Hustle on Twitter HERE! You can also post your thoughts on our Facebook page HERE!  If you feel compelled to write us, please do so at HustleOnCrave (at) Gmail.com