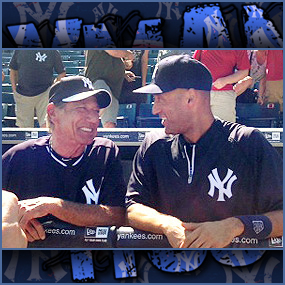 This has to be a publicity stunt by the New York Yankees. Joe Willie Namath is the honorary co-manager of the Bronx Bombers for a day … and Derek Jeter welcomes him with open arms

If only George Steinbrenner was alive to promote it.

The 70-year-old Namath threw out the first pitch, a soft strike from just in front of the mound to a crouching Jeter, and then told reporters that there is no comparison between his NFL career and that of the legendary Yankees shortstop, “The Captain” who will retire after this season.

“Knowing the scrutiny that he’s had over the years, I can’t imagine how the guy could be an angel like this,” Namath said. “He is to be respected for every phase of his life. Many of us fell short with some of that, but we learned to bounce back … It is human to err … and I know about that. We do our best to come back. Derek hasn’t made many errors I’ve been able to witness.”

Namath spent batting practice sitting behind the cage with Girardi before accompanying the Yankees manager to take out the lineup. He then sat with him in the dugout.

“I’m a baseball fan,” Namath noted. “I’m a Yankee fan. I’m a people fan. So, yeah, this is very special, and it brought back some memories too, sitting down there.”

When Jeter arrived at his locker after pregame warm-ups, he called Jackson over to talk. Just before Jackson made it there, the media crowded around to ask about Namath. Jackson said that Jeter never talks.

“I always talk,” Jeter laughed.  “I just don’t stir shit up like you.”

Of course, we’re HustleTweeting about Joe Namath and Derek Jeter, and you’re more than welcome to join the conversation HERE or write to us directly at hustleoncrave@gmail.com  Hey, have you checked out the Hustle’s Ultra High Quality You Tube Channel, with exclusive videos featuring OUR WORLD EXCLUSIVE WITH MIKE TYSON … BROCK LESNAR’S “HERE COMES THE PAIN” … ICE-T AND COCO’s SEX SECRETS … MMA BAD BOY NICK DIAZ … the list goes on and on, so if you’re not subscribing, you’re missing something … and by the ways cheapos, it’s FREE! Yes, absolutely 100 percent FREE! What are you waiting for? Check it out HERE!