Your Official Hustle Guide To The Super Bowl Betting Odds 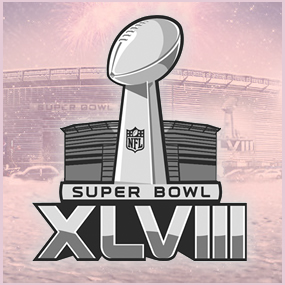 Can’t understand the point spread? We gotcha covered! Leave it to a bunch of Hustlers in an expanding Mid-Manhattan office to tell you how to comprehend the intricacies of the biggest sporting event of the year!

It’s Super Bowl Sunday in America, perhaps the holiest holiday not declared by the federal government. Today is a day where the country worships two teams who will fight over land and pigskin. Last week, when oddsmakers sat down to bang out the hundreds of Super Bowl prop bets, the East Rutherford, N.J. forecast called for temperatures around freezing with as much as a 60 percent chance of wintry precipitation. The MGM sports book held off posting a few props due to the weather, according to assistant manager Jeff Stoneback. At William Hill, sports book director Nick Bogdanovich said the shaky forecast caused him to shade some of his prop odds to the low side. Bettors were paying close attention, too. This is all part of the annual fun. People check the wind advisories. Hell, if the quarterbacks are going to put the ball in the air, and it’s breezy, that’s one thing. But if the snow is drifting in Peyton Manning’s eyes, and the wind is changing the trajectory of his throw, it’s a whole new ball game, so to speak.

John Avello, executive director at the Wynn, said in between checking the Weather Channel, he took several big bets from respected players on the UNDER last week. Then, as the forecast improved this week, he took a six-figure bet on the OVER.

“I didn’t pay a guy to give me a report on weather every day, but I kept a close eye on the Weather Channel,” said Avello. “I’ve been keeping a close eye on it, because it’s important to everything we have here. I think what it’ll happen now, and I’ve already seen it, is the OVER on the game will start to get bet. First, it was the UNDER; perhaps that was a combination of handicapping the game itself and the weather. Now, you throw the weather out, especially the wind. If there’s no wind, I think we’re going to get a lot of bets on the OVER.”

We’ve been monitoring the Wynn, which was the only big Las Vegas shop with the Super Bowl total sitting at 48. The rest were 47.5 or 47. There certainly have been more important weather forecasts in terms of helping people out of harm’s way, but Sunday’s may be the most financially-influential forecast ever. And everyone has been watching.

Another place we’re keeping an eye on is MTS, also known as www.MyTopSportsBooks.com which is the most trusted online gambling site we know of. The action is hot and heavy at MTS, giving us further evidence this is going to be the most heavily wagered Super Bowl of all time.

In an email, Senior Digital Meteorologist for Weather.com, Jonathan Erdman stated  “We saw a particularly good spike in (web) traffic Monday afternoon, as the forecast remained quite nebulous for Super Bowl Sunday, with the threat of rain or snow.”

Erdman said Wednesday that he is tracking a frontal system that could bring snow and possibly sleet or ice to parts of western, central and upstate New York, but says it’s not likely to impact Sunday’s game.

“I wouldn’t completely write off the chance of precipitation yet,” added Erdman, “but it looks very small as of Wednesday. That said, a slight change to this forecast could bring that light to moderate wintry mess a bit farther south Saturday/early Sunday, so we need to watch this carefully.”

For oddsmakers, savvy sports bettors and quarterbacks who throw sloppy spirals, wind is the most important weather element. It’s not expected to be an issue Sunday.

“There’s always a possibility this specific wind forecast could change,” Erdman said. “However, at this time, a weakening frontal system coupled with weak high pressure behind it, I think the chances the wind speed forecasts go higher are very low. I’m not expecting a windy game at MetLife Stadium on Sunday evening. Certainly nothing like the wind tunnel in Seattle in the divisional round against the Saints. Peyton Manning should feel relieved.”

It’s the biggest question in the betting world right now: Will the Super Bowl point spread reach the key number of 3?

Opinions vary, and as of Thursday morning, no Nevada sports book had made the jump from Denver -2.5 to -3, even though almost everyone was holding more Denver money. They’re hesitant to make the move, because there’s a belief that the bigger sharp money is waiting to pounce on Seahawks.

Of course, we’re HustleTweeting about the Super Bowl, and you’re more than welcome to join the conversation by following THE HEYMAN HUSTLE on Twitter HERE or write to us directly at hustleoncrave@gmail.com  Hey, have you checked out the Hustle’s Ultra High Quality You Tube Channel, with exclusive videos featuring OUR WORLD EXCLUSIVE WITH MIKE TYSON … BROCK LESNAR’S “HERE COMES THE PAIN” … ICE-T AND COCO’s SEX SECRETS … TEEN SENSATION TAYLOR MOMSEN … UFC BAD BOY NICK DIAZ … THE WALKING RIOT MISSY HYATT if you’re not subscribing, you’re missing something … and by the ways cheapos, it’s FREE! Yes, absolutely 100 percent FREE! What are you waiting for? Check it out HERE!