A Dark Day For Superman Fans 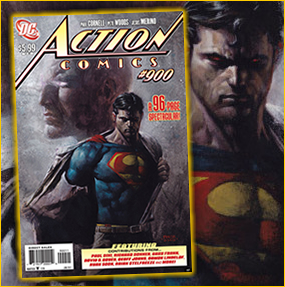 The super-hero who professes to protect "Truth, Justice and the American Way" may renounce his US citizenship! Superman makes the shocking announcement in the historic Action Comics number 900 this week.

"Truth, justice and the American way – it’s not enough anymore," The Man of Steel tells the President’s National Security Advisor, "I intend to speak before the United Nations tomorrow and inform them that I am renouncing my US citizenship."

Calm down Rush Limbaugh, Superman’s not giving up his citizenship because of health care reform or high taxes. He made the declaration after his protection of protestors in Iran becomes an international incident.

"I’m tired of having my actions construed as instruments of US policy," he says, explaining that he wants to help wherever and whenever he’s needed. "I’ve been thinking too small. I realize that now."

In a statement that was published in a New York newspaper, DC Comics co-publishers Jim Lee and Dan Didio said that despite the global outlook, the character is and always will be a red-blooded American at heart.

"Superman is a visitor from a distant planet who has long embraced American values. As a character and an icon, he embodies the best of the American Way," the statement says, "In a short story in Action Comics 900, Superman announces his intention to put a global focus on his never ending battle, but he remains, as always, committed to his adopted home and his roots as a Kansas farm boy from Smallville."

The story isn’t expected to have any repercussions in the "Superman" line of comics, because it’s unclear whether he actually follows through with the decision,  but  we have a bigger question.

Shouldn’t Donald Trump be looking into Superman’s citizenship to begin with?

See, Superman was sent to Earth as a baby to escape the demise of his home planet of Krypton, and he was found by a Kansas couple named The Kents, who raise him as their own son. Now, since he wasn’t technically born in the United States (let alone this planet), and since his adoptive parents the Kents didn’t legally adopt him , we have to take the position that Superman is an illegal alien.

We’re HustleTweeting about Superman, The Donald, and everything else you can think of, and we’d love for you to join the conversation by Followng THE HEYMAN HUSTLE on Twitter HERE or write to us at hustleoncrave@gmail.com