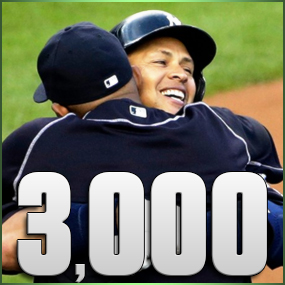 Alex Rodriguez Joins Hank Aaron as The Only Two Players in MLB History to Collect More Than 600 Home Runs, 2,000 RBIs and 3,000 Hits!

For all the controversy surrounding Alex Rodriguez, he recorded his 3,000th regular season hit in style.
AROD achieved his latest milestone in his first at-bat earlier this evening, nailing a first-pitch, 95 mph fastball from Justin Verlander of the Detroit Tigers into the right-field stands at Yankee Stadium. Rodriguez was hugged by Mark Teixeira, the on-deck hitter, and greeted on the field by all his teammates, who flooded out of the dugout as he crossed home plate as the crowd stood and cheered.

On the scoreboard, the Yankees flashed a message: “CONGRATULATIONS, ALEX. 3000.”

It was, ironically, reminiscent of the scene on July 9, 2011, when “The Captain” himself Derek Jeter reached the 3,000-hit milestone  … also on a home run and also off a former Cy Young Award winner, David Price, at the time a Tampa Bay Ray but now a teammate of Verlander’s with the Tigers. For history buffs, it should be noted that Wade Boggs is the only other player with a home run for hit No. 3,000.

The home run was No. 667 of Rodriguez’s career and his 2,003rd RBI. It was the fourth straight game he’s had a home run against Verlander. The solo shot gave the Yankees a 1-0 first-inning lead. According to ESPN Stats & Information, it was calculated at 373 feet, meaning it only would have been a home run at Yankee Stadium. It was also Rodriguez’s only hit of the game. He went 1-for-4 in the Yankees’ 7-2 win, the team’s third victory in a row.

Of course, we’re HustleTweeting about AROD Achieving 3,000 Hits, and you’re more than welcome to join the conversation by following The Heyman Hustle on Twitter HERE! You can also post your thoughts on our Facebook page HERE!  If you feel compelled to write us, please do so at HustleOnCrave (at) Gmail.com