BROCK CASHES IN THE MONEY IN THE BANK CONTRACT, WINS UNIVERSAL TITLE FROM SETH ROLLINS 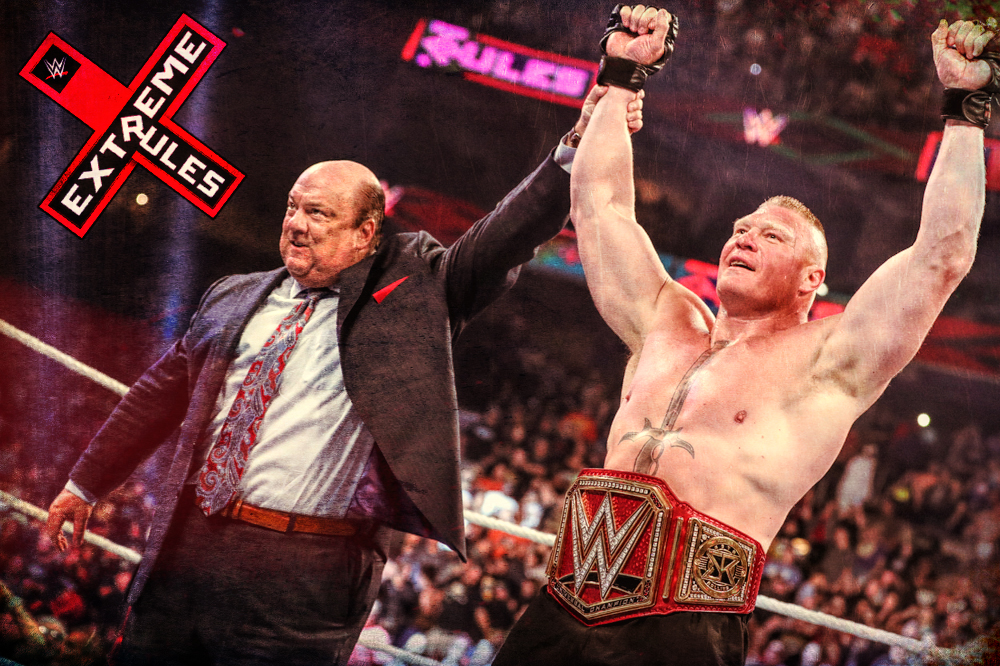 Brock Lesnar is once again the Universal Heavyweight Champion, a distinction he earned when he cashed in the Money in the Bank contract against Seth Rollins at WWE Extreme Rules in Philadelphia. Shockingly, this was told to us in advance when our boss Paul Heyman offered everyone a spoiler about Lesnar cashing in the contract!

As far as time and place is concerned, Lesnar picked his moment perfectly. Not only had Paul Heyman stoked the fires with another will-he-or-won’t-he tease earlier in the night, but Rollins had truly been through a physical and emotional gauntlet during the Extreme Rules main event, which blurred the Mixed Tag rules— men can only battle men and women can only battle women — that would both persist throughout the match and — from the beginning to the end. Not only did Lacey Evans get a few moves in on The Beastslayer, but Becky Lynch wasn’t afraid to lay into Corbin when the situation warranted. It was an End of Days from Corbin to Lynch, however, that caused Rollins to snap. Egged on by Corbin’s taunt — “What are you gonna do about it?” — The Architect lost full semblance of control, raining blows on his challengers back with a Kendo stick and steel chair before administering three Stomps to pin The Lone Wolf. (A stricken Evans got out while the getting was good, backing slowly up the ramp.)

His victory was short-lived, as Lesnar’s music hit almost immediately and The Conqueror strolled through the curtain, Heyman at his side and contract in hand. Torn between standing his guard and coming to the aid of Lynch, who was stirring at ringside, Rollins was easy prey for a pair of German Suplexes, at which point the cash-in was called in earnest and Lesnar administered a single F-5 to pin Rollins and retain his championship. Extreme Rules ended with Lesnar strolling up the ramp, his long-shot plan to regain the title having come to full fruition; Rollins, meanwhile, stared blankly at the mat. The good news, for him at least, is that Corbin & Evans didn’t succeed in tearing him and Lynch apart. His relationship is safe. His championship, however, is gone.