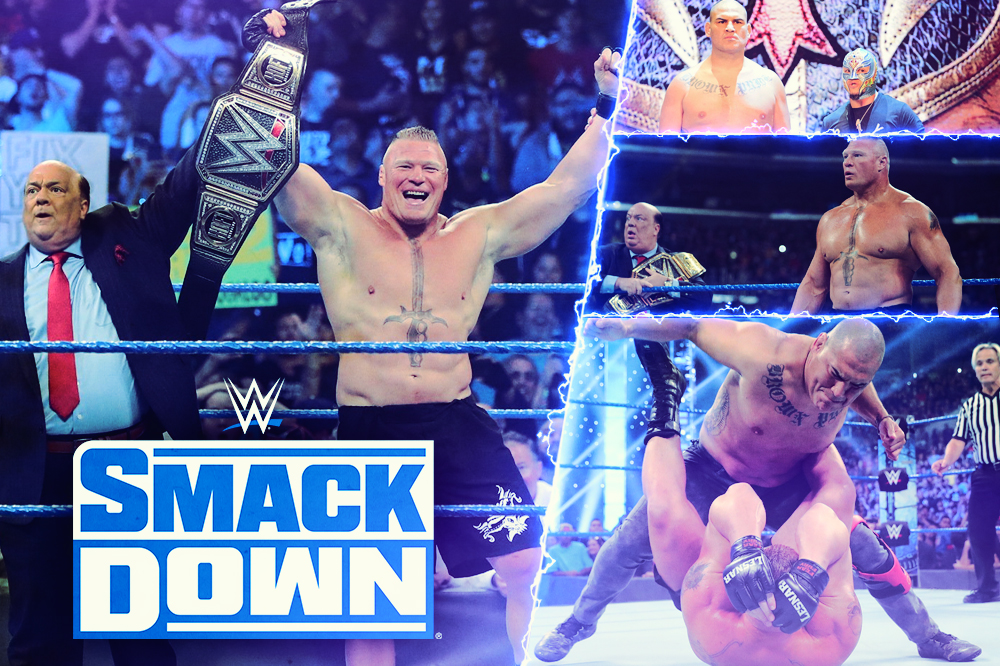 After the shocking events on RAW which saw Brock Lesnar viciously attack Rey Mysterio and Mysterio’s son Dominick … WWE debuted Friday Night Smackdown on the FOX network, featuring the main event of Brock Lesnar (with his Advocate, our boss Paul Heyman) in his first free television match in over 15 years, challenging Kofi Kingston for the WWE Title. The title change? It only took Brock moments to win the title. But a lifetime ago in the UFC has come looking for revenge on behalf of the Mysterio family! According to WWE.com:

Brock Lesnar defeated Kofi Kingston to win the WWE Championship in less than 15 seconds when he hoisted a hard-charging Kingston above his head and planted him with an F-5, but that was just the beginning of the story.

After Lesnar’s victory, Rey Mysterio’s music suddenly blared through the arena. Mysterio, who was decimated alongside his son by Lesnar on Monday, hit the scene sporting a sling on his arm, but he didn’t come alone. Rey had considerable backup in the way of Lesnar’s former MMA rival Cain Velasquez. Cain absolutely unloaded on The Beast, dropping him with a double leg takedown and landing several stiff strikes. The ambush caused Lesnar to retreat, and the new WWE Champion looked as if he had just seen a ghost.

We’re HustleTweeting about the premiere of WWE SmackDown on Fox, and you’re welcome to join the conversation on the Hustle Twitter HERE and also on our hyper-interactive Facebook page HERE!