Brock Is a Beast, But the 2020 Royal Rumble Belongs to Drew McIntyre 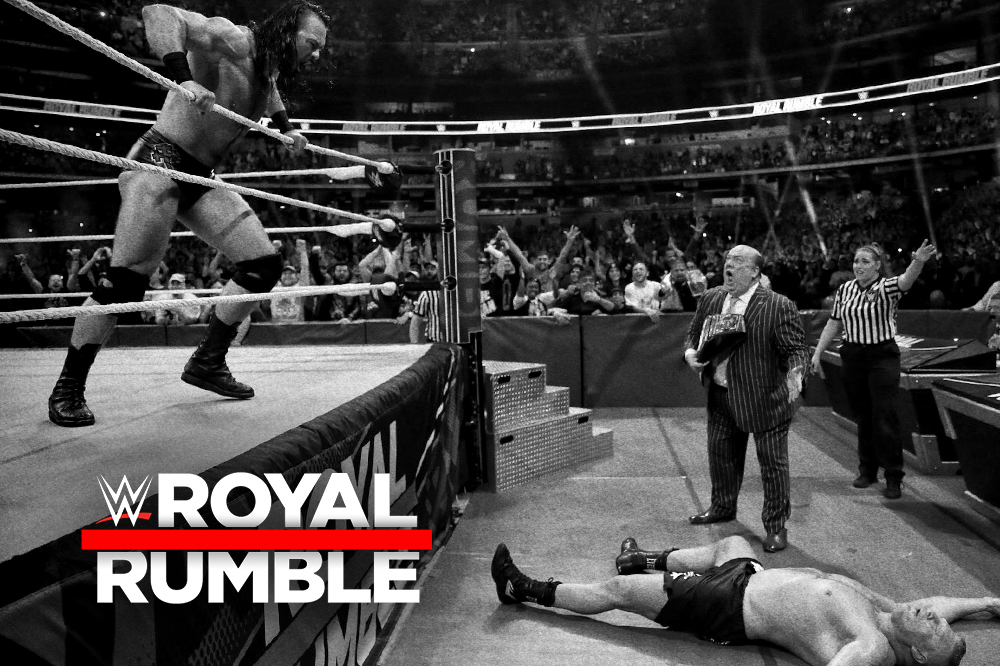 WWE Champion Brock Lesnar (accompanied by his Advocate, our boss Paul Heyman) put on an all time classic, eliminating 13 consecutive men in the 2020 edition of the Men’s Royal Rumble match, but it was Drew McIntyre‘s night. According to WWE.com:

After 10 years over two stints in WWE, Drew McIntyre will finally receive the championship opportunity he’s always coveted, and it will come on The Grandest Stage of Them All after winning the 2020 Men’s Royal Rumble Match.

The initial tone of the bout was perhaps more unique than any other Rumble in history with WWE Champion Brock Lesnar entering himself at No. 1. The Beast was far from impressed by the song that the No. 2 entrant, Elias, serenaded he and Minute Maid Park with before entering. In fact, Lesnar didn’t even let him finish, chasing him down to force the match to begin on his own terms before smashing Elias’ guitar over his back and unceremoniously tossing him out.

The rampage continued for Brock with eliminations of Rowan, Robert Roode and John Morrison. The arrivals of former Lesnar rivals Kofi Kingston — out for retribution after losing the WWE Title to Lesnar in eight seconds last October — and Rey Mysterio seemed to change the match, and The Beast soon found himself on the wrong end of a 3-on-1 assault when Big E joined the fight at No. 8.

But that disadvantage did little to slow Lesnar’s frenzy, and he picked them off one-by-one, dumping Mysterio and Big E before F-5ing Kingston to the outside.

Lesnar ran his elimination tally up to 13 — all in succession — to tie the all-time Rumble record after his simultaneous removals of NXT North American Champion Keith Lee and Braun Strowman, catching his two fellow behemoths off guard from behind.

McIntyre, who entered at 16, turned the match upside down with a Claymore that sent The Beast toppling to the outside moments after Ricochet caught him with a swift kick below the belt. Afterward, the powerful Scot’s fearless glare lingered on Lesnar for what felt like an eternity.

The WWE Universe exploded when WWE Hall of Famer Edge came out at No. 21 for his first action since his retirement in 2011. The Ultimate Opportunist showed little rust, summarily cleaning house with Spears for everyone in the ring.

Seemingly in perfect position to win the Rumble for a second consecutive year, Seth Rollins joined as the final entrant with AOP and fellow Raw Tag Team Champion Buddy Murphy in tow. The Monday Night Messiah’s disciples helped him eliminate Aleister Black, Kevin Owens and Samoa Joe — all of whom then brawled with Rollins’ associates to the backstage area.

With his reinforcements suddenly nowhere to be found, Rollins failed to recruit Roman Reigns — who entered at 26 — for a temporary Shield reunion, and he was soon eliminated by McIntyre.

Edge and Randy Orton rekindled their Rated RKO alliance for the second time in the evening for a double RKO on McIntyre after earlier dividing and conquering The O.C.’s Luke Gallows and Karl Anderson. But little had changed between The Rated-R Superstar and The Viper, as Edge — moments after nearly being caught with an RKO from out of nowhere — instead surprised Orton with an elimination when the two seemed poised to team up on Reigns.

The Big Dog eventually won a battle on the apron with Edge, eliminating the returning legend to leave himself and McIntyre as the final two competitors.

With one more colossal Claymore Kick, Reigns was ripe to be thrown out, giving way to a visibly emotional celebratory moment for McIntyre.

Among those who took notice was The Rock, who wrote “Very happy about this. I’m a big fan of DM,” on WWE’s Instragram post recognizing McIntyre’s triumph.

The Scottish Terminator had worn his lack of title opportunities as a proud chip on his shoulder in recent weeks. And for the man who had been cast aside from WWE in 2014 after an up-and-down career that saw him once dubbed “The Chosen One” by Mr. McMahon, everything had finally come full circle.

No longer mired in self-admitted complacency or false starts, McIntyre has breathed new life into his career and is one step closer to realizing the potential that has long made him one of the industry’s most promising Superstars.

We’re HustleTweeting about WWE Royal Rumble, and you’re welcome to join the conversation on the Hustle Twitter HERE and also on our hyper-interactive Facebook page HERE!