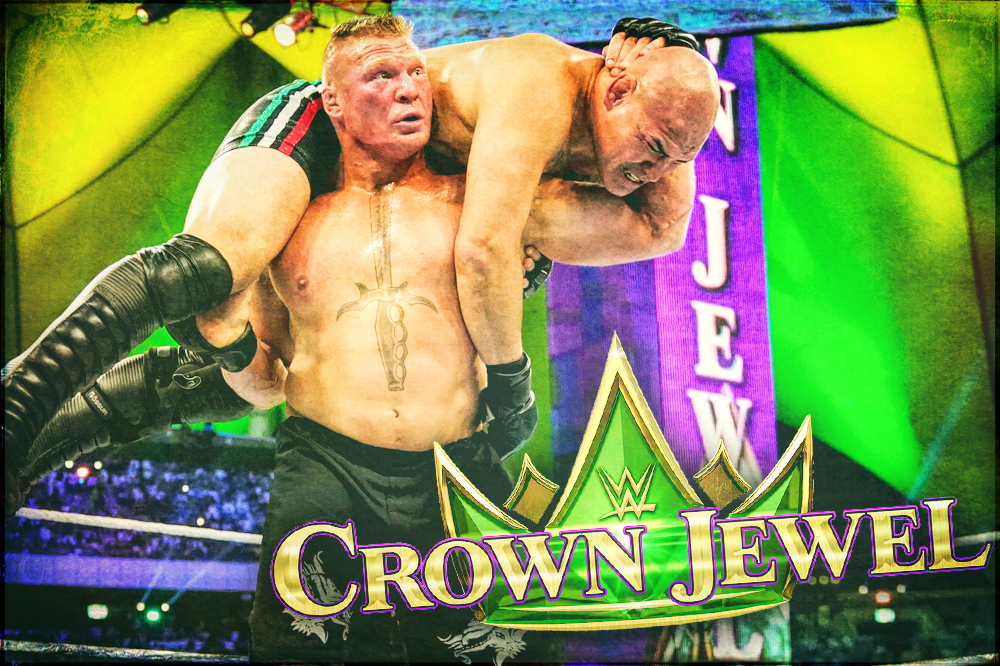 The scar on Brock Lesnar‘s face will remain, but the scar “carved into his school” (credit: Brock’s Advocate and our boss Paul Heyman) has been avenged. Brock Lesnar tapped out Cain Velasquez at the 2019 edition of WWE Crown Jewel. According to WWE.com:

In a match nine years in the making, WWE Champion Brock Lesnar defeated Cain Velasquez in the latter’s WWE debut, retaining his title and avenging the UFC heavyweight title loss that sent The Beast into MMA exile and left him with a small but distinctive scar beneath his left eye.

This was, for all Paul Heyman’s pre-match posturing, no guarantee. Velasquez is the one man who could conceivably live comfortably in Lesnar’s head, the UFC victory hanging like an unspoken albatross on The Conqueror’s neck for the better part of 10 years. To say Brock is afraid of the former cage-fighting champion might be a stretch, but he certainly wasn’t looking past him. And given that Velasquez (who made an arcane bit of history as the first Superstar to debut in a WWE Title Match) looked more than comfortable once the bell rang on their Crown Jewel match, it wasn’t a stretch to look at The Beast Incarnate as an unlikely underdog, both mentally and physically.

In fact, Lesnar — perhaps still seeing some ghosts from the last time he squared up with Velasquez — spent the early goings largely on defense, dodging or in some cases absorbing a series of kicks and strikes that eventually took the champion off his feet. Cain pounced on the downed champion and began to rain blows, but Lesnar answered quickly, wrenching Velasquez’s arm into a Kimura Lock that forced the newcomer to submit.

The Beast didn’t necessarily go out on a high note, though, as Rey Mysterio — a Lesnar rival who accompanied Velasquez to the ring — rushed the squared circle with a steel chair to force Lesnar to break the lock when he initially refused to do so after the match. While The Beast tossed Mysterio aside long enough to drop Velasquez with an F-5 onto a chair, Mysterio quickly roared back with another chair in hand, swinging wildly at Lesnar, drilling him several times and forcing him into retreat.

So Lesnar gets his vengeance and perhaps exorcises some demons, though it might be a stretch to say the rivalry ends at one apiece. If there’s anything we learned from this whole episode, it’s that Brock Lesnar and Cain Velasquez might be destined to dance forever. There is no one without the other, and there is no end in sight. For that matter, the issues between The Beast and The Master of the 619 seem far from settled as well.