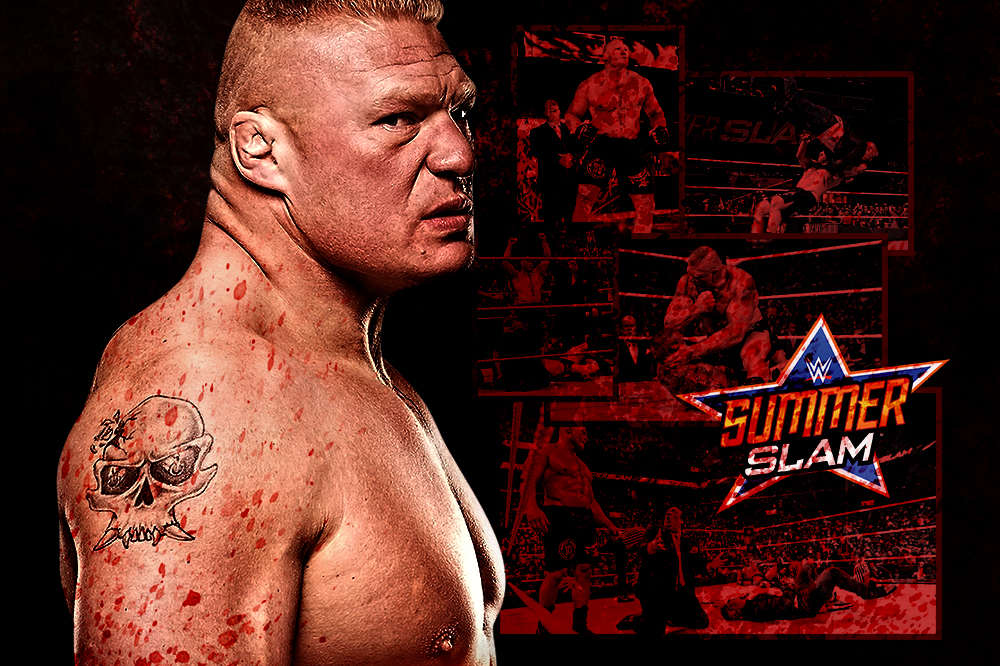 In Perhaps The Most Brutal Main Event in WWE SummerSlam History, The Beast is Unleashed as the Referee Declares a TKO After The Viper is Rendered a Bloody Mess!

Brock Lesnar bloodied Randy Orton with vicious elbows, splitting open Orton’s head and forcing the referee to step in and declare The Beast Incarnate the victor via technical knockout. After Lesnar’s hand was raised by his advocate, our boss Paul Heyman, medical personnel scrambled to stop Orton’s bleeding. WWE Smackdown Commissioner Shane McMahon entered the ring, only to be confronted by Lesnar, and then became yet another victim to a Lesnar F5. According to WWE.com:

The first pay-per-view clash between Brock Lesnar and Randy Orton was billed as a dream match 15 years in the making. It only took about 15 minutes to turn into a nightmare when Lesnar pounded his opponent into a gory mess, earning a near-unprecedented TKO victory over The Apex Predator before destroying an authority figure to cap off his assault.

The shocking ruling by WWE officials was a merciful conclusion to what was easily the most impressive instance of snake extermination since St. Patrick. Lesnar made it clear early on he had abandoned all pretense of defeating Orton, opting instead to conquer him in the most medieval sense of the word. In many ways, it was a logical culmination of both Lesnar’s last four years in WWE and this match in particular, which began with Brock charging Orton into the corner while The Viper pounded away at his opponent’s back in hopes of creating some separation.

Orton knew going into the match that his outta-nowhere equalizer of the RKO would be his only hope. Unfortunately for him, the wind was sucked from his sails when an early attempt at the move fell flat, literally, as Lesnar simply stepped backwards and shoved Orton to the mat from midair the second The Viper sprang up to hit it. With Orton having taken the full brunt of his own maneuver, Lesnar administered a German suplex before charging him into the corner and suplexing him again. Brock refused to allow The Apex Predator to gain any kind of momentum — let alone the breathing room he would require to connect with an RKO.

Lesnar took Orton on this grisly tour of Suplex City for six cycles before The Viper rolled out of the ring and tried to throw hands. He got a body slam atop the SmackDown Live announce table for his troubles. When Orton attempted to seek shelter in the front row, The Beast threw him like dead weight back onto the table, which crumbled beneath Orton.

The Beast briefly took the fight back into the ring for a seventh suplex, before returning to the outside and stripping the Raw announce table of its trappings in order to prepare it for annihilation.

Ironically, this led to the one point in the match where The Viper seemed like he might pull it off. Before Lesnar could drive Orton through the table, The Apex Predator uncoiled with a wicked RKO that flattened The Conqueror. The Viper came out smiling, if not entirely upright, from the exchange, and suddenly the match was a ballgame.

Sensing he had an opportunity to turn the tide, Orton quickly hauled his foe onto the ropes and struck with his hanging DDT before hitting a second RKO. It only earned him a two-count, but it left Lesnar stunned all the same, and Orton had his breathing room for the RKO … and then some.

“And then some,” of course, turned out to be the dreaded punt to the head, which Orton lined up and was about a shoelace away from landing before Lesnar snatched him up mid-stride into the F-5. The Viper had enough fight in him to do what almost none have and kick out of the dreaded maneuver, but had he just taken the three-count he might have been better off.

While Orton attempted to recover, Lesnar removed his gloves and pounced, driving his bare fists and one particularly gruesome forearm into his opponent’s face, refusing to stop until The Apex Predator was busted open. As the WWE Universe slowly caught sight of the extent of Lesnar’s brutality — Orton’s face, and the mat, seemed to change color before their eyes and Orton could do little more than feebly try to protect himself — it became clear the match had devolved beyond a fight and into a mugging.

What’s worse is that it was one that didn’t show any signs of stopping. When WWE officials swarmed the ring to tend to The Viper’s injuries, Lesnar backed off for a moment before attacking again, and again and again until the bout was finally called as a TKO in favor of The Anomaly. (Orton would ultimately receive ten staples as a result of the attack.)

And then he kept punching again, over the protestations of Paul Heyman until SmackDown Commissioner Shane McMahon rushed the ring to try and call Lesnar off. To Lesnar’s credit, he obliged … but only after giving the prodigal son an F-5 for his troubles. By the time Lesnar walked out, the crowd was stunned into silence (or disgust), Orton and his would-be savior were left in ruins, and The Beast himself seemed only mildly amused that anybody thought it would end differently.

Of course, we’re HustleTweeting about Brock Lesnar vs Randy Orton, and you’re more than welcome to join the conversation on the Hustle Twitter HERE and also on our hyper-interactive Facebook page HERE!