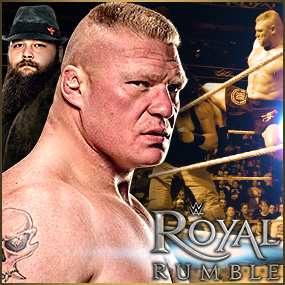 And Then Came the 23rd Entrant!

When the buzzer rang for the 23rd time, the mood of the Royal Rumble changed. With the WWE World Heavyweight Championship on the line, Brock Lesnar entered the Royal Rumble with eyes set to kill! The Beast Incaranate lacerated all whom were in the ring, suplexing them over his head Then came the brick wall known as Braun Strowman. Lesnar hit the member of the Wyatt Family with multiple clotheslines and Strowman was still on his feet, which probably wasn’t the smartest thing to do. The Beast‘s goal was now to mutilate Strowman. Hitting Strowman with a thunderous rebound-clothesline got him off his feet, but Brock wanted to do more damage. Lesnar threw the 6’8’, 385 pounder into the corner and delivered multiple high-knees to the skull of Strowman. The buzzer rang for the 27th time, and out came the leader of The Wyatt Family, Bray Wyatt. The Wyatt Family, (who were previously eliminated), began assailing The Beast Incarante and threw him over the top rope, thus ruining Lesnar’s chance at becoming the WWE World Heavyweight Championship, but also placing a target on the back of The Wyatts.

Of course, we’re HustleTweeting about WWE Royal Rumble, and you’re more than welcome to join the conversation by following the Hustle on Twitter HERE or write to us directly at hustleoncrave@gmail.com Hey, have you checked out the Hustle’s Ultra High Quality You Tube Channel, with exclusive videos featuring the #HUSTLEBOOTYTEMPTATS SUPERMODEL OF THE YEAR … OUR WORLD EXCLUSIVE WITH MIKE TYSON … BROCK LESNAR’S “HERE COMES THE PAIN” … ICE-T AND COCO’s SEX SECRETS … MMA BAD BOY NICK DIAZ … the list goes on and on, so if you’re not subscribing, you’re missing something … and by the ways cheapos, it’s FREE! Yes, absolutely 100 percent FREE! What are you waiting for? Check it out HERE!

In this article:brock lesnar, Royal Rumble