Sneak Peek at Brock Lesnar's DeathClutch, Available In Bookstores Next Tuesday, May 24th! 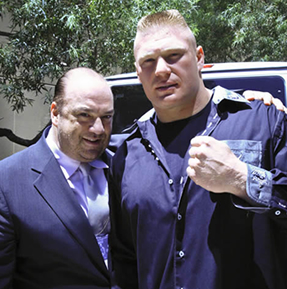 The Baddest Dude on the Planet’s Autobiography Comes Out in Less Than A Week, But You Can Take A Glimpse Inside The Book Right Now!

Brock Lesnar’s autobiography DeathClutch, which he wrote with our own Hustler De Tuti Hustlers Paul Heyman will be released by the prestigious publishing house Harper Collins next Tuesday, May 24th, and the buzz for the book is already very strong.

In one of the most emotional chapters of the book, Brock writes about his friendship with former AWA World Heavyweight Champion Curt Hennig, who was famous in WWE as "Mr. Perfect."

"Curt was a second-generation wrestler, the son of a big time wrestler in the AWA territory named Larry The Axe Hennig," Brock writes, "Curt’s dad smartened him up early about what the pro wrestling business had to offer, and the price you have to pay to achieve success in it."

Brock continued, "Curt taught me something that sticks with me to this day – in the wrestling business, you have to GET IN TO GET OUT! I can still hear him say the line. Curt knew the pro wrestling business was built on a pile of people who had been used for everything they were worth, and then dumped on the  side of the road. I’m not saying that’s right or wrong. I’m just saying that’s how it is. Since that’s the score in pro wrestling, Curt came up with the idea that the only way to keep your sanity, or your health, was to GET IN TO GET OUT!"

Brock, who is a very private person, opened up and wrote, "I wish he practiced what he preached. Curt got in and really got out. He died in 2003. Nice rib … I really think about him every day. We could have had so much fun together. I miss him so much, because with Curt you were never just passing time. You were enjoying every minute of it. Why did he have to go and die?"

This is going to be one explosive book about Lesnar, his life, WWE, Vince McMahon, UFC, Dana White, and a lot more. That excerpt was as open as Lesnar has ever been in public. To pre-order the book from Amazon, CLICK HERE!