Roman Reigns as The Tribal Chief at WWE Clash of Champions 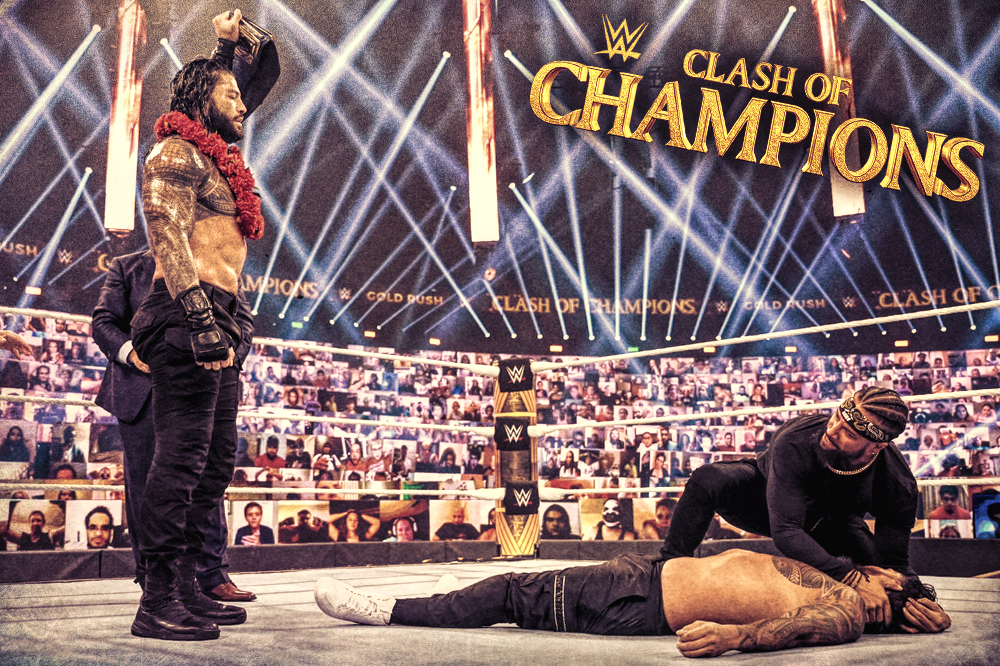 WWE Universal Heavyweight Champion Roman Reigns (along with his Special Counsel, our boss Paul Heyman) put in a truly dominant performance against his cousin Jey Uso in the main event of WWE Clash of Champions: Gold Rush, live from WWE ThunderDome in Orlando, Florida.

Call him The Big Dog, call him the Universal Champion, and now, call him “The Chief.”

That’s what Roman Reigns demands to be called, and after the shocking brutality he unleashed on his own cousin, Jey Uso, to retain the Universal Championship, who would argue otherwise?

The highly personal family issue set the stage for an intense battle from the opening bell, with Reigns happy to engage in trash talk almost immediately.

Jey quickly appeared overmatched, with any offense he mounted quickly stymied by The Big Dog.

But Jey eventually quickened the pace, putting Reigns on his heels after hitting a pair of tope suicidas and a superkick to net a near-fall. He again came close to scoring one of the greatest upsets in WWE history with two more near-falls following a roll-up and his top-rope splash. But in kicking out after the splash, Reigns caught Jey with a low blow and later donned a smile, suggesting it was intentional.

Reigns leveled his cousin with a Spear, resuming the verbal lashing and refusing to cease the beating until Jey acknowledged him as his “tribal chief” before hitting another Spear on his defiant cousin.

Disgusted by his cousin’s actions, Jimmy gave Reigns want he wanted, calling him “The Chief” after the bell. Paul Heyman crowned Reigns with the same lei Jey wore to the ring to complete the coronation.